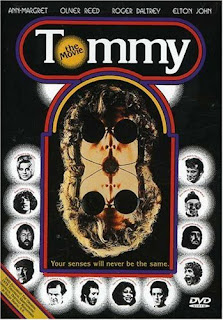 I have a confession to make. I love the film version of Tommy. I know, I know, I know. Ken Russell is a nut and Pete Townsend hated it and it was the most egregious example of over-the-top decadent 70's filmmaking until Sgt.Pepper's Lonely Hearts' Club Band came out. (Both films featured Paul Nicholas, but I'm sure that's just a coincidence.) None of this is news to me, and yet I retain a warm fuzzy spot for the first movie I ever saw that dealt directly with issues of child sexual abuse, drugs, and of course, uh, chocolate and beans.

It's not that I wasn't raised right. My beloved oldest brother, the one who's single-handedly responsible for introducing me to most of the music I love in the world, played me the real version, the stage version. I knew it before I ever saw the film. I knew the story and the music pretty much by heart.

And so I was supposed to hate the film, I know that. I admit, catching it by accident on TV is a little like tripping into a swimming pool full of vanilla pudding, or possibly taking a big swig out of a glass you think is water which turns out to be peach schnapps. It's more than any one person could or should process at one time, no matter what chemicals are involved.

There's something so gloriously over-the-top about it, so gleefully who-the-fuck-cares, that I admit, I like it. So there.

Well, it is more true to Keith Moon's vision than Pete's. that's probably why Pete has to hate it.

Your first exposure to Tommy is seeing the Broadway version in the early 90s. The one where everybody forgives the child molester...

Swear to god, saw it on the record company's dime back in the day and came this close to taking a hostage....

I love the movie, I have it on dvd as well as the soundtrack. My favorite scenes are Elton John's Pinball Wizard and Eric Clapton's Eyesight to the Blind sequences. Yes, it is so 70's and very Ken Russell over the top visually. I like listening to it or watching it on cable.

"The one where everybody forgives the child molester..."

Great. I was testifying about a child abuse case yesterday and the details were so bad that the court reporter couldn't come back after a break in my testimony. Knowing the details of how that stuff goes does not lead you to be too forgiving. Sorry for the bummer and harshing our Tommy mellow. But Tommy is in part about the subject, and part of why I love it and Pete.

But as to liking the movie, fly your Ken Russell freak flag high!

Can't tolerate it myself, but you go. 8)

The Broadway version of "Tommy" was one of the worst things to penetrate my eyeballs (seriously, that's how it felt) ... topped only by That Abomination Known As "Lennon"

It would have been interesting to see how Townshend's first choice - Stanley Kubrick - would have directed the material.

I first saw this at a midnight movie as a stoned teenager. I found it awesome.

I rented it as an adult; found it slightly less awesome. But I'm glad it's around. Did it get mentioned in the wretched-excess Listomania a couple of weeks back?

Tina's Gypsy Queen always makes me feel, well, procreative.
I saw this during my first trip, and somehow it made perfect sense. Pete is sometimes a bit too serious in his angst about things. Perhaps he channeled his anger into his brief cameos, which are pretty great. Roger and Ann (as if they are my good pals) really reach with the notes. I remember trying to sing along with the sound track, and recovering only after a week of scotch, vapo-rub, and no talking (quite a sacrifice for me)