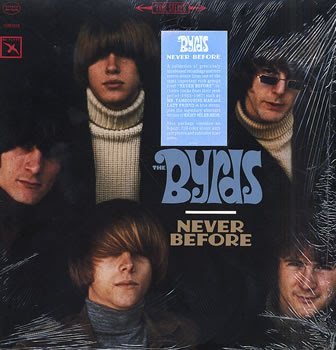 Incidentally, Never Before, which came out on the indie Murray Hill label, was the first above-ground album featuring Byrds outtakes and rarities, but once Sony refurbished the Byrds catalog in the 90s, it was more or less disappeared. And with it went the vastly superior stereo remix (by original Byrds manager Jim Dickson) of "Mr. Tambourine Man," which makes the ones on all current Sony Byrds CDs sound retarded, if you'll pardon the word. (I posted that one a while back; if you can't find it, e-mail me and I'll shoot it to you.)

This "Lady Friend" is something a little different. Apparently Crosby did the remix himself, trying to make it sound as contemporary as possible, and that may or may not have included dubbing a new drum part over the Mike Clarke original (whoever was the percussionist in Crosby's 80s touring band did the deed, or so it's rumored).

I don't know if any of that's true, but I do know that this version does in fact sound far more modern than the version on the official Byrds CDs at the moment; whether that's a good or a bad thing I'll leave to the purists amongst us.

It is, however, absolutely fricking glorious. I think you'll agree...

Postscript: Somebody asked for the original single remix on the official Sony Byrds CDs. Here it is.

Compare and contrast.
Posted by steve simels at 7:57 AM

Take the shrinkwrap off of that pic! This LP also has a really nice alternative version of "Why" too if I remember correctly!

It does indeed, but unlike "Lady Friend" it's now on one of the official Sony Byrds cds...

Isn't McGuinn running the show with regards to the Byrds reissues? In the Gene Clark book "Tambourine Man" there is a discussion of how McGuinn selected tracks for the box set to minimize Gene Clark's contribution.

Wonderful. The vocals are clearer (I can actually follow the words without a lyric sheet) and the horns and guitars ring out. I think you're right: the drum track sounds sufficiently different that it may be another player.

Wasn't friction between Crosby and Mike Clarke one of the problems within the Byrds? On the reissue of "The Notorious Byrd Brothers" one of the (unlisted) bonus tracks is a lengthy bit of raw studio tape featuring the band stumbling through a new Crosby song, and he (Crosby) is brutal to Clarke in a fake-smile, passive/aggressive way. The other band members try to get him to back off, but he won't. It wouldn't surprise me if another drummer is on the re-mix.

Post the other mix of Lady Friend so we can compare them.

I've heard Crosby's acoustic demo of this song - with really interesting/intricate guitar. Gorgeous, even though he forgets the words and gives it up halfway through.