The Girl Who Put the You Know What Back in Country

From 1978, produced by her soon-to-be future hubby Nick Lowe, and featuring stellar back-up by Graham Parker's ace band The Rumour, please enjoy Carlene Carter -- daughter of June Carter and stepdaughter of Johnny Cash -- and her debut single "Never Together But Close Some Time." Written by brother-in-law Rodney Crowell, who went on to marry Roseanne Cash. 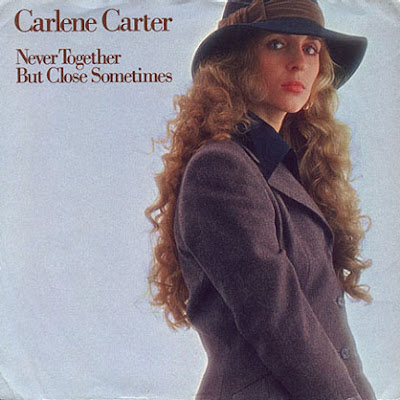 I've loved this song since the 7-inch vinyl days, and Carlene's done several others equally swell over the years, although this one's country-pop/reggae fusion is pretty much sui generis. That said, I would just like to go on record as admitting that although I attended at least one of Carlene's Bottom Line shows in '78, I was not -- alas -- in the audience when the then 23-year-old hellraiser famously made the comment referenced in the title of this post. (In the presence of her mother, I might add).
Posted by steve simels at 12:35 AM

Thank you . I have loved this L.P. since it came out and was at the infamous show. (and sitting at the table right next to Johnny and June). I've also seen Carlene twice in the last 6 months and while she has had her ups and downs, she's still as wacky as ever and singing great.


Seriously, I think as many people have claimed to be in the audience that night as retroactively claimed to have seen the Yardbirds at the Anderson Theater with Jimmy Page.
:-)

What a weird and wonderful confluence of great musicians. I'm not sure it actually works, but still fascinating. Thanks, Steve.

I like Carlene more when she would cut loose vocally, i.e., "I Fell in Love".

Seriously, I think as many people have claimed to be in the audience that night as retroactively claimed to have seen the Yardbirds at the Anderson Theater with Jimmy Page.
:-)

I haven't heard this song, or thought of it, since the old days of WPIX FM in New York, where I no doubt heard it back in the day, but somehow just reading the title made me instantly remember the main hook and that I loved this track. It's like a happy reunion. Many thanks!

First off: I love this blog! Great work so far.

You wouldn't happen to have Musical Shapes in its entirety, would you?