More Tales From the Intertubes

Okay, this is a true story, I swear to god.

Last Saturday -- a Jewish holiday, which is not germane, although I had just dined on a very nice brisket -- I was on the bus heading into NYC when a completely obscure album I hadn't thought about in ages popped into my head unbidden. I couldn't for the life of me remember the name of it or the band that made it. But I knew the album was on Sire, that it was released in the late 70s, that the band had played CBGBs, that the LP (never to my knowledge on CD) had a striking cover image, and that there was at least one song from it that absolutely slayed me -- or so I remembered; I hadn't heard it for decades.

Bottom line is it was driving me bonkers all day and then -- again, I swear to god -- I was web surfing on Sunday and suddenly there was the album cover and a link to a transfer from the original vinyl.

Ladies and gentlemen, from 1979, please enjoy Alda Reserve and their seductively melodic and suspiciously Television-esque should-have-been-a-New-Wave-hit "Dressing for Love." 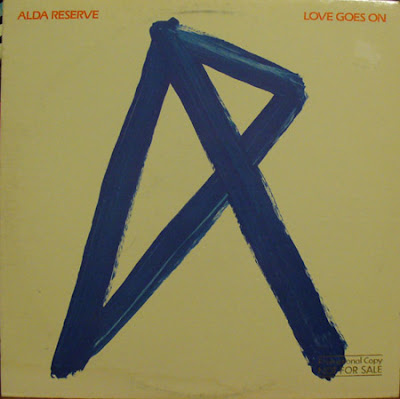 Hey -- now that I've heard it again I'm pleased to discover that I still think it's a great song, although I also now recall that absolutely nobody agreed with me about it back in the day. Of Alda Reserve, I can find little or no info except that demented death dwarf and Springsteen leech Dave Marsh panned them in Rolling Stone and that the guy who wrote and sang the song was keyboardist Brad Ellis. Whatever happened to him subsequently has, so far at least, been lost to history.

Anyway, the rest of the album is almost equally strong; if you're interested, you can download it here.
Posted by steve simels at 12:03 AM

I missed this one! Very cool!

Seems as though Trouser Press dismissed them as Roxy Music wannabes. Based just on that listen, I'd say the comparison is superficial. Good stuff!

I don't hear them as Roxy at all...classic NYC rock band in a line from the Velvets, I think.

About the only similarity I hear is a Bryan Ferry-like timbre to Ellis' voice. A momentary lapse in the normally snarky-but-fair Trouser judgment.

Hey, I drank a bottle of Alda Reserve just the other night. Now there's some MASH!

Hmmm... I can see why people might have been frustrated with this back in the day. It's catchy enough to stick in your head, but not somehow not as catchy as it wants to be. And it seems like it's always on the verge of going to some amazingly cool place... then it doesn't.

I remember buying this album in 1979. Still own the original, still playable. I think these guys had their own sound, not derivative of Roxy or anyone. Virtually every song on the LP is listenable. Did it ever come out on CD?

A/R was managed by Marsall Chess and the first album was recorded by Ed Stasium.They recorded a second album that was superior to the first.But it was self produced and Seymour Stein would not release it.
Keep an eye on youtube - It's been restored and some of it will show up there later this year - 2011.
Brad Ellis stopped performing but never stopped writing.Believe it or not he may yet re-emerge.

Tony Shanahan went on to play bass for Patti Smith.

Guitarist Mark Edward Suall went on to play with The Revelons,Cruel Story of Youth,The Valentine Six and Andre Williams among others.

Matthew Patuto went into teaching and writing about percussion.

The second LP was titled MOON-JOON and will be released in full sometime in the next year.