Stones in My Passway

Here's an interesting curio you might not have heard: From 1965, it's Levon and the Hawks with their folk-rocking flop single "The Stones I Throw (Will Free All Men)." 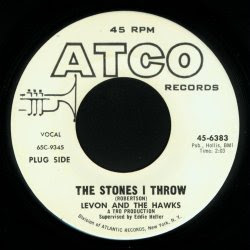 You know those guys better as The Band, of course. The chronology is a little vague, but apparently the record was made just prior to hooking up with Bob Dylan (live and in the studio) throughout 1966, but before they actually changed their name. In any case, as you can hear, they already pretty much had what we consider both the classic Band sound and the whole Dylan thing post-"Like a Rolling Stone" figured out.

Oh, and this is a nice little postscript -- more or less the demo for the song. It's just Robbie Robertson, wired after a club gig, singing and playing it into a home tape recorder in a motel room on the Jersey Shore a few months before the official recording of the single.

Incidentally, both of these tracks first surfaced on CD in 1994 on the terrific Band box set A Musical History.
Posted by steve simels at 12:08 AM

I think that's Richard Manuel sing on both.

Manuel's singing on the record for sure.

According to the box set, however, it's Robbie on the motel version. It's his song, after all...

I really thought it was Richard on the demo, too. Never realized Robbie could sing like that.

It's Richard. "According to the box set" means "according to Robertson," who owns everything connected to The Band and has released an endless string of ever-more-expensive greatest-hits collections with no input at all from the surviving members (no financial participation, either).