The Girl With Colitis Goes By....

Sad news just in over the wires.

LONDON (AP) — The real life Lucy from The Beatles' song "Lucy in the Sky with Diamonds" has died after a long fight against lupus. The death of Lucy Vodden at age 46 has been announced by St. Thomas' Hospital in London, where she was treated. The hospital said Monday she died after battling the disease for years.Vodden came to the attention of John Lennon when the Beatles' young son Julian came home from school one day with a drawing that he said was "Lucy in the sky with diamonds." 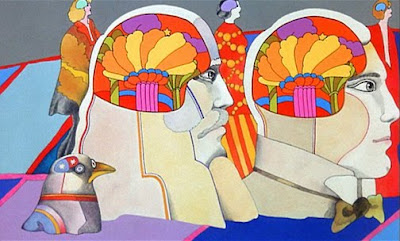 As I said, sad news indeed. Especially given that Mean Mr. Mustard still walks the streets a free man.
Posted by steve simels at 1:40 PM

Note to self: Girls in Beatles songs apparently less interesting than the actual Alice from Alice in Wonderland to readers.
:-)

Vodden came to the attention of John Lennon when the Beatles' young son Julian . . .

So Julian was the son of all the Beatles?? How does that work?

I've always been suspicious of Lennon's explanation of the source of the song. It just sounds too cute.

Well, it could work on a variety of levels.

I was pretty impressed that Julian found the woman a few years ago and apparently did a lot for her. She lived in Surrey and was a keen gardener: he sent her gift certificates to gardening centers and stuff. A class act all the way around.