Death, Where is Thy Ring-a-Ding Ding?

The short version: Wilko Johnson, the great guitarist of pub rock notables Dr. Feelgood, was diagnosed with terminal cancer in January of 2013.

A couple of years earlier (2010, to be precise) he found himself seated next to Roger Daltrey, at some awards show or something, and the Who singer turned out to be a fan of the Feelgoods. At which point, the two a) bonded over their mutual love for Brit rock pioneers Johnny Kidd and the Pirates (auteurs of the original "Shakin' All Over") and b) vowed to work together while Wilko still remained on this mortal coil.

Here's a live version of a song from the resulting album, which has just been released... 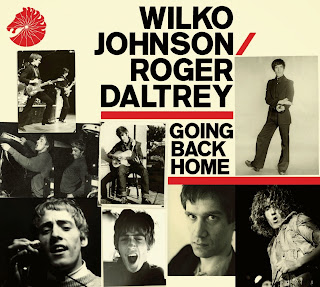 Let me repeat -- Wilko is dying. And yet this is some of the most life-affirming stuff I've ever seen.

I should add that I am soooo ordering the album over at HERE and you should too.

As of this writing, Wilko is still with us, BTW.

Long may you choppy power chord, my friend.

It's great! The current Who should rock like this.

Wilko is always a favorite of mine. You turned me on to him when you gave me Dr. Feelgood's second album.

Well, that kicks all sorts of tasty ass.

I'm impressed, this is very good!

Am I the first to notice the late Chess era horse head graphic on the upper left of the cover?

Is this the High Numbers circa 1964?
Seriously rockin!

This is goddamn great. And, I gotta say, I prefer Daltrey's voice in his lower register. He sounds boffo.

Started listening and said to myself, fuck, this doesn't sound like Roger Daltrey. It's GOOD. Now I see from the other comments that I'm not alone in thinking old Roger is the best Roger. This is badass stuff. Thanks for posting.