From circa 2009 or 2010 -- on Elvis Costello's tv show Spectacle -- please enjoy the now sadly late Mr. Winchester with his ineffably touching and beautifully written tribute to the not-so-silly love songs of his youth, "Sham-A-Ling-Dong-Ding."

That's the divine Neko Case sitting next to him, with EC in the middle of the row of singer/songwriters; Sheryl Crow and Ron Sexsmith are to Costello' right.

You'll note, in a close-up, that Neko is crying genuine tears by the song's finish. I have to admit that when I watched the video for the first time, I was too.

AN INTERESTING AND ALARMING HISTORICAL FOOTNOTE: Winchester attended Williams College in Massachusetts in the early 60s, where he fronted a sort of Animal House style frat-party garage band that was locally quite successful (and went on to record some demos in NYC that almost landed them a record deal).

Also in the band was noted problem gambler William ("The Book of Virtues") Bennett. 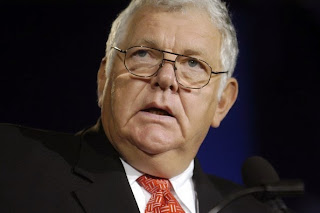 It is perhaps one of the great historical ironies of our times that Bennett -- the future hypocritical Conservative scold and Bush I era drug czar(!) -- was in an r&b group with perhaps the most famous hippie draft-dodger of the Vietnam years. One who pardoned by Jimmy Carter on his first day in office, I should add.

Very nice and touching song. I think it got to everybody on the panel there, especially Elvis. I welled up too. RIP Jesse.

Wow. That was beautiful.

Never been able to find the name of the band. Interviewed a guy who was in it, but I lost my research notes circa 1988.

Lovely clip and one hell of a trivia tidbit. I don't recall any incidents of Jesse W. exactly touting that fact on his resume. A Showman's Life (especially Buddy Miller's rendition) never fails to get to me.

If you want to pay a nice tribute to Mr. Winchester and, at the same time, send a cathartic up-yours to the nasty, brutal, soul-sucking WINTER OF 2013-14, pull out a copy of Jesse's first album and cue up the song "Snow". If you live the U.S. Northeast or Midwest, or basically anywhere in Canada (Toronto for me), it'll make probably make you smile and give you strength. Hell, I thought about the song just yesterday when I was trudging through... guess what??!!

Stop over to Elvis Costello's official blog, click on "Yellow Press" and read the entry titled "Jesse Winchester - Quiet About It." It's Elvis' own eulogy to Jesse, and it's the best thing I've read about the man. EC is a damned decent prose writer as well as songwriter.