Okay, this is on at least one level a mea culpa story, so please try not to think unkindly of me.

The short version: Some time last summer, a faithful reader and blog pal (whose name I won't mention, but whose initials are Phil Cheesebrough) sent me a care package of CDs by some artists he liked and was helping out in an unofficial capacity; some of them were from his local area, and some were by a Nashville-based singer/songwriter named Liz Longley. As is my wont, I immediately put them onto my Stack of CDs to Listen To at Some Point, which then as now is about six hundred feet high.

I didn't listen to them, is what I'm getting at. Hey, I'm not proud of it.

Cut to a couple of weeks ago: Phil sent me an e-mail with a picture of Ms. Longley.... 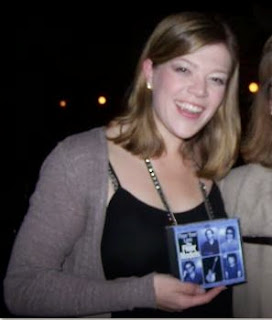 ...who, as you can see, was holding a copy of Floor Your Love, the brilliant CD featuring a bass player whose name rhymes with Sleeve Nimels (and which you can order from ZERO HOUR RECORDS over HERE); Phil informed me that Ms. Longley planned to listen to it in the car during a forthcoming day or so's drive to her next gig.

I found this both amusing and flattering, as you can imagine, and I asked Phil who she was, and should I be listening to her music?

He replied "Schmuck. She's the woman whose CDs I sent you last year, you insensitive philistine clod." (He actually phrased it more politely, but that's what he probably meant. Certainly, it's what I deserved.)

In any event, to my immense relief I found I still had the CDs, which I then played, and whaddya know -- it turns out Phil was absolutely right; Longley is great. Truly; a voice to die for, and a really terrific writer.

Here's a video to give you an idea.

And from one of those CDS, here's her stunning version of "River" -- pretty much my favorite Joni Mitchell song ever, and she does it total justice.

I should add that when I played that on my pal Allan Rosenberg's intertube radio show a few weeks ago, I introduced it as being by Joni Rivers. As in -- can we talk?

Hey, I was sipping elitist chardonnay at the time.

Anyway, you can find out more about Liz -- including how to order her CDs -- over at her website HERE.

Oh, and I should also add that Liz just got signed by a label that a) you'll have actually heard of and b) is a perfect fit for her, artistically. Her most recent self-issued CD is set to get a national release in the fall. I'll keep you posted.

To date I had never heard a cover of "River" that I had thought worthy of the effort. No longer.

I really love her voice --- makes listening to a Joni song positively wonderful (yes, I admit, she's not one of my favorites).

And Liz deserves a copy of the CD with the revised cover and liner notes, don't you think? :-)

My wife & I caught Liz at a house concert she did with Barnaby Bright, an excellent duo. Glad you've finally discovered her. She's a marvelous performer.

How about a follow up to this story after you see Liz in concert at Rockwell Music Hall?
I hope you have time to stay afterwards to meet her. I'm jealous you get to see her with a full band. That other reader is correct, Liz deserves the new ZeroHour copy. And you should be the one to give it to her this time, not me. Have a great time!