Your Friday Moment of Pre-Conceptions Being Challenged

So the other week, on the occasion of a Listomania about bad cover versions, somebody nominated a Van Halen version (with Sammy Hagar) of The Who's "Won't Get Fooled Again." 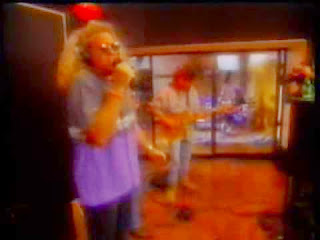 And I, perhaps predictably, responded by saying something to the effect that hell, that's too scary for me to even contemplate, let alone try to find.

In any event, strictly out of morbid curiosity, I did finally try to find it, and here it is.

And I gotta say -- Hagar's obnoxiousness notwithstanding, this is pretty damned impressive, particularly Eddie's transposing the synth intro from the original onto guitar. I'm still not a fan of these guys, but damn -- that's a lot of music for only three instruments.

Make sure you listen to it under the headphones, BTW. The video quality is piss poor, but the audio is great.

Discuss.
Posted by steve simels at 9:31 AM

It's pretty decent, credit where credit is due. Although to me, it's primarily because 1) the guys are clearly =into= it - they know it's a great tune, it must be fun to be able to play; 2) as you say, Eddie Van Halen does some cool stuff; and 3) I think I already mentioned, it's a great (!!!) tune.

However, the drumming Van Halen can't touch Keith Moon; and Hagar is annoying (although not unbearable in this context).

Off topic, but related: I still think 'Jump!' is (by far) their high point, 80's synth and all. David Lee Roth is not my favorite vocalist, but I sure prefer him to Sammy Hagar...

I heard Eddie do "Panama" as an instrumental on Letterman some years ago. And it made me wonder why bands so carefully construct rhythm tracks only to have them covered up by more-or-less obnoxious singers. Late Hendrix albums like First Rays of the New Rising Sun are full of brilliant tracks that stand alone beautifully, topped with semi-competent work vocals. But hey! The Beatles sang, so that means everybody on the label has to sing!

However, the drumming Van Halen can't touch Keith Moon; and Hagar is annoying (although not unbearable in this context).

Yeah, the drumming got on my nerves, too. Guy is trying waaaaaaay too hard.

I dunno, dude -- I'd kill to be in A band who could play that song that well. Even if it was just at a rehearsal for fun....

Yeah, well, to each his own. I love the original, but this just offends me. Nothing against Van Halen though. They did decent stuff every once in a while. But music, I feel, isn't about how many notes you can squeeze out of your guitar or whatever... Then I'd be an Eric Crapton fan, and that'll be the bloody day. Just saying...

Why Marah isn't a household word is beyond me. Great, great band.

I've seen the Who (well, post Keith Moon incarnations, which I know aren't really The Who but still put on excellent shows) do this live several times, always with superb results. VH is trying here, but for me they just can't escape their inner bombasts.

But the song has depths that can be plumbed by a suitably inspired performer; witness the astonishing acoustic version by Pete Townshend and classical guitarist John Williams from 1979's "Secret Policeman's Ball": http://youtu.be/XQnDBiyIc3o As good as music gets.

".....And it made me wonder why bands so carefully construct rhythm tracks only to have them covered up by more-or-less obnoxious singers."

there was a classic story told by a music journalist (who happened to be Jewish) who was interviewing Eddie recommending that he record solo stuff without the band, stretch out a bit.

Honestly, Steve, Marah has gone a rather disappointing acoustic route as of late. The intensity seems to be gone. Their newest album, Mountain Minstrelsry, is of no interest to me. Maybe they'll get it back. Let's hope. But you're right: Kids in Philly should've made them superstars.

Some of you guys are unnecessarily harsh. This was great! Why compare it to The Who? That seems silly. Is anyone gonna be Keith Moon? Jeez, is anyone even gonna be Kenny Jones? This was a great one-off.

I never thought I'd be saying something nice about Van Hagar, but that clip rocks LAMF. They toss it off like pros having fun. Eddie's imitation of the sequencer at the beginning is brilliant. They don't just nail it, they tear it up.

Indeed, the best part of this is EVH playing the organ parts on the guitar, but Anthony actually surprised me the most. Sammy, well, my momma always said...