Your Tuesday Moment of Words Fail Me 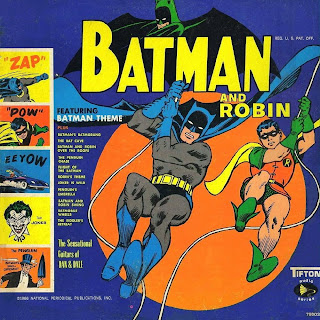 The Back Story (Short Version): This was recorded, in 1966, for a quickie album cashing in on the Batman TV show, and it was billed to The Sensational Guitars of Dan and Dale. In reality, it was performed by members of a well known avant-garde jazz band and a well known sort of underground rock band of the period. You may not be able to guess who the musicians are immediately, but at about the halfway point of the track, when the solo guitar comes in, you should recognize at least one of the players.

Hint: It was produced by Tom Wilson.

[h/t Willard's Wormholes]
Posted by steve simels at 9:15 AM

The guitarist sounds like either Lou Reed or Sterling Morrison to me; I'd guess Lou.

I have no idea at all about the jazz band though.

Ha! Is this the Sun Ra Batman album? I was well pleased with myself for noticing this was a "fake" at the time, and waited until I found the incomparably cheesy original soundtrack. More fool me...!

Not Lou or Sterling. You got the city right, however.

We have a winner.

It's the entire Blues Project; Al Kooper denies he was there, but nobody believes him

I feel so much better -- my deleted guess was Steve Katz.