Good Things Come to Him Who Waits. Well, At Least Sometimes. 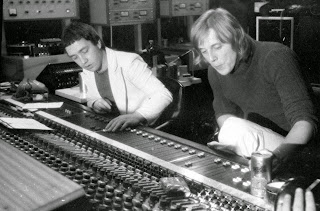 In any case, the record itself is one of the landmarks of the Glam Era -- a perfect three chord "Sweet Jane" derivative with hilarious topical lyrics, gorgeous layered electric and acoustic guitars, and absolutely brilliant production, including a bass guitar and cowbell breakdown (a la the bit in Free's "Alright Now," but hookier) that sets up a massive series of final choruses that once heard are etched into your auditory canal forever. An absolute masterpiece, is what I'm saying. 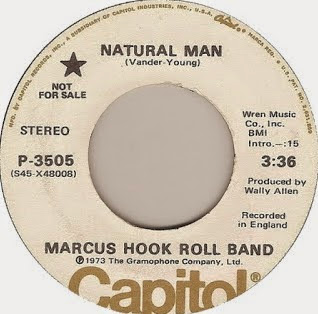 You can read a contemporary account of the single -- from the now defunct house organ of United Artists Records -- over HERE. Incidentally, the author of said piece, Martin Cerf, was one of the hipper record company guys at the time, and a friend to numerous rock journalists of the period including the late great Greg Shaw; he may, in fact, have been a partner in Greg's BOMP Records, although I'm hazy on that. 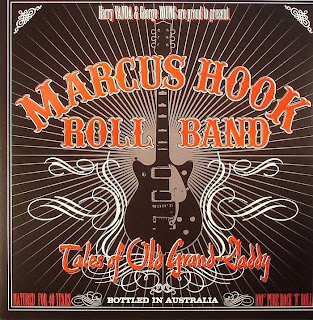 Rhino's reissue comes with several single bonus tracks (both A and B sides) as well as terrific and informative liner notes by original producer Wally Allen (of Pretty Things fame); you can order it over at Amazon HERE. If you're a fanatical Vanda and Young completist, Amazon also has the Japanese import CD version which has two extra bonus tracks.

You're welcome.
Posted by steve simels at 7:52 AM

Steve speaks the gospel truth!!!! One of the greatest singles of the 1970's.

Really nice. Never saw the name -- Marcus Hook Roll Band -- and never heard the song in its time. And it's got one thing that's important to me (anyway): lyrics that makes you go back for a second and third and fourth listen while the rest of the song bulldozes its way into your cranium.

The '60s are rightly held up as the great period of rock-n-roll, but stuff like this makes me think that the pinnacle of power pop in the early '70s is the true ne plus ultra of rock. Great find, Steve!

And when the Weasels did it, Glenn, who was famous for changing lyrics, used to sing at the end of the breakdown: "A little bit of honky -tonk, a little bit of harmony. I just want to do my qualudes, but people won't let me be!"

Which, needless to say, is NOT the real lyric. It made us laugh every time. To this day, I don't know what the real lyric is! I'll go listen now and find out.

It's already not the best rock n roll song I've heard this year. I think the reason it didn't hit is the vocals are really off-putting. Irritating and without character. Especially on the chorus.
It's only interesting now as an artifact with a pedigree. A reasonably well crafted rock song a notch or two below Slade or Sweet.

Have you posted anything, Steve, about the Vanda-Young later project/group "Flash & the Pan"? I believe two albums of synthesizer pop/rock with two great singles; "Down Among the Dead Men" and "Hey St. Peter" If not, I can share those re-issued CD's.

Boy do I disagree about the relative merits of this versus anything The Sweet did. Estimable as that band were, their records sound like period pieces -- this, on the other hand, is a classic timeless rock single.

Needs a stronger vocal, better rhythm section and more ballsy edge. Otherwise good ingredients are there. Not exactly "Good Times." So, dicks back in the pants, please.

This is closer to Eddie Cochran. Even the best Sweet records are closer to bubblegum. Not meant as a criticism, btw.

I knew the Easybeats only from the hit "Friday...". I saw a video on youtube a week or so by Stevie Wright. I had never heard of him. Cat can/could rock.

See If you can find Stevie's "hard road" single.

Not bad at all. Thank you.
Now if someone could only find a rip of John Miles's 'High Fly.'

Count me in the "love it" category. Just recently listened to the album on Rhapsody. A lot of great boozy rock but this single is the real deal.

Is it Vanda or Young on lead vocal? Do I detect a Dutch accent? Anybody know? Whoever it is, the person should not be a lead vocalist. This track could have been so much better. Needs more punch and a dynamic singer. Might have been a monster, then.

"Quick Reaction," though a lesser song, has the balls [of AC/DC] that this one lacks. Silver Shoes & Strawberry Wine is pretty good but also flawed. Too bad they couldn't put it all together for Natural Man, which is the best tune on paper. Vastly superior precursor to AC/DC's Live Wire, sorta.

P.S. I love the US version of Desolation Boulevard. I'd say its a bit too hard and rough to be labeled 'bubblegum.' I have a story regarding the album ... but a bikini clad, dancing Sandy just followed up "Loose Booty" with "Do Me" by Jean Knight.

100% agree with Desolation Boulevard being a great album.

Vickie: It's George Young on vocals.

PS: I'll dig through my Weasel cassette tapes and see if I have a live version of Natural Man.

Re: Desolation Boulevard -- yes the *US* version is great as it has more of the Chinn/Chapman songs on it (and the much, much better single version of Fox on the Run...) That's the version I grew up with.


I heard the remaster of the UK version when it came out in 2005-ish and it was much more hard and not as poppy as I had remembered and didn't like it nearly as much. Even though it includes the unintentionally(?) hilarious B-side "Someone Else Will"...

Shriner: Any song that begins and ends with an a cappella "If you don't go down on me someone else will", can't be anything but a winner.

Not that I went very often, dressed for the part, or, fit the bill, but I do remember this tune from the waning days of the English Disco. For a couple of years, I used to give a gay glitter guy friend of mine rides to Rodney's and drop him off. I usually didn't stick around too long, if at all. I didn't want to class up the joint.

It was a tiny shithole with mirrors, so that everyone could see their inflated egos in costume. Dumb little lude girls playing dress-up while sucking cock for blow. Those plant IQed nymphettes, indiscriminate pedders, and pathetic male groupies could wallow in their 475 square feet rathole of Watney's and kidney pie vomit, as far as I was concerned. They couldn't even get decadence right. They made it boring, stale and depressing. They were the fetid dirt shoveled on glitter and glam's coffin.

I'd rather be up the street seeing SAHB or Rory Gallagher at the Whisky. At least they had a liquor license. If I wanted costumes, I preferred the Rocky Horror variety at the Roxy, where there was tons of action of a decidedly more adult nature. The stuff I carried in my purse those days. Oh my. A veritable arsenal.

Vickie Rock - Gun play makes the sex sizzle. You won't come too soon when you're cuffed with a .41 rimfire against your skull, will you?:-)