Your Monday Moment of Holy Crap, The Modern Rock Band as We Know It Begins Here

From the 1972 British LP On Air -- although the songs themselves were recorded, almost certainly, in 1960 -- please behold in breathless wonder actual pretty good quality live recordings of the incredibly great Eddie Cochran performing in front of a live teen scream audience. 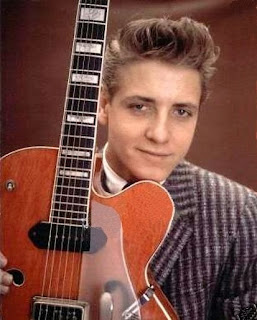 With the immortal "Summertime Blues"....

...and (the to my ears, sometimes, even better)"C'Mon Everybody."

Those were recorded in England, of course (where Cochran was a much bigger star than he was in the States) and presumably on that last 1960 tour just before his tragic death in the same car crash that crippled Gene Vincent. I should add that just about every subsequently famous aspiring British guitar player followed Cochran around on that tour, including a teenaged George Harrison.

I really think Cochran was potentially the greatest and most innovative of them all, and that includes Buddy Holly (who was, admittedly, more prolific). In any case, I hadn't heard those two tracks until last week when my chum Allan Rosenberg played them on his intertube radio show and blew my tiny mind. I mean, this stuff achieves heavyosity, and this is in 1960, fercrissakes.

Incidentally, all four hours of said show are now archived and available for streaming over here at HERE; scroll down and click on the link for Lost at Sea episodes 8/19/14 and 8/19/20.

A real cool time is guaranteed for all.
Posted by steve simels at 7:48 AM

C'mon Everbody. I am not schooled enough to know where I heard it before. But I have. Did someone else have a hit or fun with it after Eddie?

Ah yes, NRBQ. Thanks. I actually thought they had written it. Schooled again.

Some boring minutiae: The tracks are taken from Britain's short-lived ITV popular music series of the time, "Boy Meets Girls," a Jack Good Production which succeeded "Oh Boy!" The tunes were broadcast on three separate dates in January 1960. I would assume the backing band is the Kelly Four. Sadly, the video portion of the show seems to have been wiped.

I loved the Eddie Cochran hits which were broadcast as "Flashbacks" on local Top 40 AM radio in the mid 1960's. For a while I only owned "Summertime Blues" on this great Liberty Records label compilation that I totally wore out. That record was so cool. It had "Short Fat Fannie", "Come Softly to Me", "Stranded In the Jungle", the original "Cherry Pie", "You're Sixteen", "Rubber Ball", and "I'm Available", plus a bunch of others I can't recall.

Anyway, when I was babysitting my neighbors kids, I noticed that they had a copy of Eddie Cochran's Memorial album. I was ten. Yes people used to trust ten year old girls to watch their infants, it was a better time. Kids grew up faster and learned responsibility.

Anyway, when the couple came home from their night out, I asked them if I could have the Cochran album instead of money. So that's how I got my first Eddie Cochran album. I filed it between The Coasters' Greatest Hits and The Best of Sam Cooke in my small but growing record collection.

It bugged me that my Cochran album didn't have Twenty Flight Rock [not to mention Weekend, which I didn't know about yet]. Even though it was never a huge hit, at least one local DJ had a hardon for it and played it as a welcome Flashback frequently. It shoulda been on there. But in early 1972 that problem was solved with United Artists' mindblowing 2-LP Legendary Masters release.

Vickie Rock - Know a spot, I like it a lot on the weekend.

I didn't think the C'mon Everybody cover question was serious. C'mon, everybody's covered it!

Eddie's one of the few legit 50's rockers with Southern California Roots. He had great taste in women too. That little number from Newport Beach was somethin' else.

The NRBQ cover is definitive.


Rock n roll of any stripe doesn't get any better.

NRBQ's fine for 1969, but Cochran is the shit. Thank god for Town Hall Party.

Vickie Rock - the house is empty and my folks are gone

BTW--check out the top pickup on Eddies Gretch guitar in the photo.

He swapped out the original for a kick ass Gibson.

What I wouldn't have given to see him play live....

I have both of these on an old bootleg cassette I bought years ago. Killer.

Humble Pie covered C'mon Everybody on the Smokin' album.

Isn't there supposed to be a master volume knob on the upper right of the Gretsch? Where is it? Picture looks like it might be airbrushed in that area. Am I crazy?

Vickie Rock - mean an' lean in a dirty pair of jeans

Interesting (I hope) story: I remember reading an interview years ago done with Marshall Crenshaw, and he mentioned that he absolutely LOVED Eddie Cochran's "C'Mon Everybody", not only as a song but also as a piece of sound; he said he used to hear it at this club in N.Y.C. club that would mix rock in with its soul and disco stuff and that the song would sound GREAT over this giant sound system. He also said he used it as inspiration to write one of his early songs; he said he imagined that he'd been hired to write the follow-up to "C'Mon Everybody" and tried to come up with something. It worked. The song he came up with? "Something's Gonna Happen", which became his first solo single (on Shake Records) in the early 80s and is a pretty awesome song - and record - in its own right.

I love NRBQ, but get outta here. Nothing says definitive like Eddie Cochran. And I can't believe someone interested enough in music to visit and comment on this blog could be unfamiliar with an artist so key to the development of Rock N Roll. Eddie was an innovator. He overdubbed on these recordings. I forget which song, but one of them has a cardboard box for the drum sound. Even the Sex Pistols paid homage. I'm also surprised no one mentioned "Somenthin' Else", which is practically punk rock, and "Nervous Breakdown", as they are at least as good as "Summertime Blues" and "C'mon Everybody"

Get with it people!

Somethin’ Else is my favorite Eddie Cochran song.

But C’mon Everybody’s call to festive liberation is irresistible. It makes me want to dance. And playfully toss my undergarments to the object[s] of my affections. Its bursting energy and raucous freedom make me wanna take on all comers.

His best songs are driven by pent up tension, sexual frustration and resentment toward authority. Salvation is shakin’ on the dance floor and bangin’ in the back seat. It’s primal “lose your panties” rock 'n' roll. This music means business and I’d be the first girl to give it back.

Vickie Rock – My baby’s Number One, but I’m gonna dance with three or four.

I went to the beach yesterday, and "C'mon Everybody" came on the headphones. That's a cardboard box for drums, and Eddie played everything.

Huh? I thought the cardboard box was on "Sittin' In the Balcony." Didn't Eddie use L.A. session guys on "C'mon Everybody?"

I forgot to mention the sense of humor in Eddie's tunes as well.

Vickie Rock - The feature's over, but we're not through

That version of "C'Mon Everybody" is killer. Somehow even more up to date.