Friday Video/Movie Roundup: Special Attack of the Killer Criterions (And a Few Other Things) Edition

Well, it's Labor Day weekend, and to celebrate I thought I'd clear my desk of some of the freebies various video companies are still foolish enough to lavish upon me from time to time. Incidentally, unless otherwise noted, I partook of these on DVD.

I should also add that my little brother kindly contributed to the following, so be nice to him.

And without further ado.... 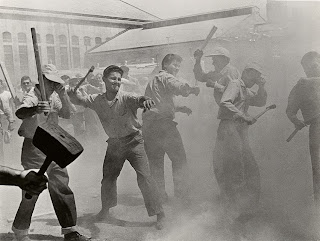 Don Siegel's groundbreaking and tough-as-nails 1954 prison flick, shot on location at Folsom with real inmates and guards as extras. Ripped from the headlines B-movie making at its best, and (coincidentally) the inspiration for a certain early rock-and-roll classic by the proto-Coasters. Criterion's transfer looks like a million bucks; cool extras include a 1974 tribute to Siegel by his pal Sam Peckinpah.

Here's the deal: Essie Davis, as the titular lady sleuth, is not just an Australian Jazz Age version of The Avengers' Mrs. Peel with even better clothes (plus she fools arouund) -- she is the greatest thing in the history of the world. Seriously. Whereas I used to be on record as saying that all women -- past present and future -- paled before the magnificence that was Lucy Lawless as Xena, Warrior Princes, I believe the torch has now been passed to a new generation of distaff kick-ass.

Okay, as you may have gathered, I'm sort of obsessed with this show, which is basically a racy version of Agatha Christie, but this second season -- which isn't quite as dark and depressing as season one, but if possible even better plotted -- is the most fun you'll have in front of your Orthicon tube anytime in the foreseeable future. I should add that a) ACORN's transfers are impeccable and b) the show has just been renewed for a third season. In short: Life is good. 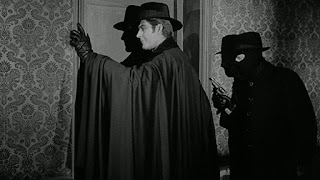 The great George Franju's wonderfully stylish 1963 homage to Louis Feuillade's 1916 masked superhero serial of the same name (with nods to Feuillade's Fantomas and Les Vampires as well). Dramatically speaking it makes very little sense -- which may have been deliberate on Franju's part, given Feuillade's huge influence on the Surrealists -- but its black-and-white cinematography is ravishing, as is the musical score by Maurice Jarre and damsel in distress leading lady Edith Scob. Criterion's impeccable transfer also comes with some nifty bonus features, including a lovely 15-minute short film Franju made to celebrate cinematic pioneer George Melies.

The Gone With the Wind of comedy. And stolen, as you can see in the clip, by beatnik chick Barrie Chase as the girlfriend of world class mama's boy Dick Shawn. Criterion's new version, a spectacular high-def transfer from a newly restored print, features over 30 minutes of material that has been unseen since the film's initial theatrical release (and never before on home video). The second half still drags by comparison with part I (another reason it's the GWTW of comedy), but you'll laugh your tush off at large swaths of it. And as I'm fond of saying -- two cheers for director Stanley Kramer, who, as a rule, doesn't get anywhere near the props he deserves from the critics.

John Frankenheimer's despairing black comedy sort of sci-fi flick about the worst mid-life crisis of all time may just be my favorite 60s flick in any genre. Certainly, it's the best thing Rock Hudson ever did, and it's pretty much brilliant from the opening Saul Bass title credits set to Jerry Goldsmith's chilling modernist score to the final fade-out. Criterion's new transfer, which does full justice to James Wong Howe's black-ad-white cinematography comes with an audio commentary track by director Frankenheimer, as well as a making-of featurette with interviews with Frankenheimer's widow and co-star Salome Jens

6. SALVO [FilmMovement.com -- available for streaming or on DVD beginning January 15]

An unusual and memorable movie that starts as a crime drama and then changes into a study of a relationship between two characters, with thriller and psychological elements. The plot plays out over eight consecutive summer days in contemporary Palermo, Sicily. There are three main characters, well portrayed by Saleh Bakri, Sara Serraiocco and Mario Pupello. A fourth important characters dies out of frame. This is an impressive debut for co-writer/directors Fabio Grassadonia and Antonio Piazzi. -- Drew Simels 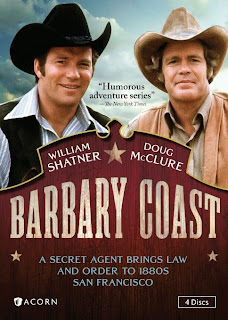 William Shatner, in his first TV role after Star Trek, is a master of disquise secret agent who partners with honest-but-you-got-to-watch-him saloon keeper Doug McClure (a charmless Dennis Cole in the opening pilot episode). The show didn't last long, but as tongue in cheek Western knock-offs of Mission Impossible go, it's actually a lot of fun, and Shatner and McClure have real chemistry. ACORN's source material looks amazingly good for its age, and Animal House Dean Wormer John Vernon is a great guest villain in the pilot.

Most of the scene with Sid Caesar and Edie Adams in the hardware store in IAMMMMW could have been cut. And I really don't like the ending. Other than that, there is no movie ever made that has a funnier cast and funnier moments, starting with when Durante sails on out there ---

I admit to being old enough to have seen the first release of IAMMMMW at a Cinerama theater. As usual, Criterion's attention to detail is pretty jaw dropping in this release. They even include the original "police dispatch" calls that played over the sound system during intermission! The transfer is flawless and, if you have any fond memories of the movie from your youth, you will be smiling. (Not to mention the fact that you may have only seen one of the many butchered versions on cable.) Yeah, BG, it could have been tightened up a bit here and there but, man, Jonathan Winters, Phil Silvers . . . .

Re: Riot - I pretty much enjoy anything Don Siegel was involved with. The Killers, The Beguiled, Charley Varrick and the Shootist come to mind.

Adding Neville Brand into the mix seals the deal for me. I love this guy. Maybe for all the wrong reasons, but I do, nevertheless. Plus it's got Dobie Gillis' dad.

Mad World: My family went to see this movie at the Cinerama-Dome in Hollywood. This was when going to movies was a big deal. Seriously, you'd have to go to ticket agencies to get tix to Hollywood first run films. It was exciting.

My dad loves slapstick comedy and I can still hear him laughing his guts out during the screening. It's a fond memory. It's definitely a comedy that was made for the big screen.

I've seen it from time to time when it screens on TCM. My enjoyment of the film stems mainly from the fact that I can put it in its time frame. Plus all that comedic talent is really appreciated and missed. The never-ending cameos are also muy cool. They just don't make comics and character actors like they used to. I also dig some of the familiar filming locales, a lot of which have changed drastically since then. Based on my kids' reaction to it, the film doesn't hold the same charm for the younger generation.

Another revelation about seeing the movie years later is that while Barrie Chase is a given, I didn't realize just how sexy I find Edie Adams. Is it just me?

Kramer was one of the best and it took balls for him to do a comedy after his previous heavies.

And then there's this Shirelles tune in the soundtrack:

Vickie Rock - Well, we could tell them that we're here on an archaeological expedition.

It owes as much to James West and Artemus Gordon as it does to Mission: Impossible. And Conrad looked a lot better in those gaucho cut suits which highlighted his toned gluts. Yummy. But so were most of the female guest stars. Decisions, decisions. Miss Piecemeal comes to mind. Oh the escapist, comic book glory of it all.

Why is it that Trampas was so enjoyable on the television screen and so awful on the big screen? And yes, Dennis Cole was a stiff. I'm sure we've all seen his homo-erotic photos.

Vickie Rock - saloon girl with a heart of gold

I guess I was wrong about the younger generation not appreciating this film. In fact, some are obsessed with it. There is hope, after all. Check this out:

Para-fuckin'-noia. Arguably Hudson's best. However I do enjoy screening Pillow Talk followed by Pretty Maids All In a Row. Makes for a great, romantic popcorn double feature.

Vickie Rock - There's nothing like a responsive student body.

P.S. How'd they get those Mormon boys to sing a C&W Lalo Schifrin theme for a soft core flick. Only in America, God bless it.