An actual street sign for an actual place in Greenwich Village. Apparently there is a patron saint of aspiring recording artists. And speaking of which, here's the demo of The Marcus Hook Roll Band's "Natural Man" I mentioned yesterday. 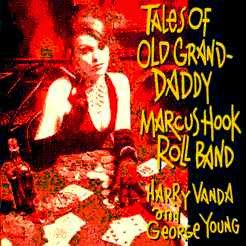 If we can agree on anything, I suspect it's that said demo is inferior to the official single release version I posted previously. Despite the participation of Malcolm and Angus from AC/DC.
Posted by steve simels at 10:07 AM

Very punny, indeed, mon frere. By the way...did you know that Cleopatra's Needle, behind the Metropolitan Museum is really a monument to the turntable? At least, that's the way I heard it.

The picture brought back some memories. Fr. Demo Square is the one and only place I ever busked in NYC back in the early 80's. Made no money, had a lot of fun.

The demo of Natural Man has a crumby mix, especially on the chorus where the vox are nearly drowned out. Despite that, it is more in your face and ballsy than the single. I kinda like its raw feel.