Found Music (An Occasional Series): Songs From a 30 Plus Year Old Mp3 Player I Just Unearthed

So hey youngsters -- most of you won't recognize the gizmo in this picture, but in the immortal words of David Letterman, this is how we old-timers used to enjoy the rock-and-roll music. 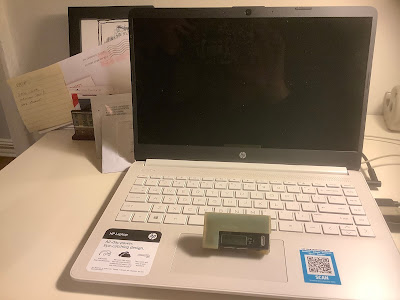 Oh hell -- most of you youngsters won't even know who David Letterman was, but that's a separate issue.

In any case, that's a Creative Zen Nano mp3 player -- a birthday present a friend gave me in the early 90s, as I recall -- that was essentially a flash drive, with a built in volume control and LED readout, that stored approximately 200 songs in various digital formats. I loved it, not least of which is because you didn't have to worry about charging it on your computer; you could just pop in a AAA battery and you were good to go.

Bottom line is, I recently found that gadget in the back of a drawer somewhere, and was delighted to discover that it still worked like a charm. More to the point, I was listening to it yesterday, because the playlist was a snapshot in time of the music I dug in the past but -- alas -- the title readout was so small and I'm so old geezer blind I couldn't really figure out who this one of the songs was by when it popped up. Obviously, it was a cover of The Byrds' version of Bob Dylan's "My Back Pages," which struck me as relevant to that Byrds tribute album I'm producing, but I couldn't quite place who it was by or where it was from.

Fortunately, a trip to Amazon provided the solution -- it was Marshall Crenshaw from this 2006 compilation album I had totally forgotten ever having owned.

BTW, you can still get a copy of that CD to stream at the aforementioned Amazon OVER HERE. The identical mp3 player can also be found over at eBay for a paltry 35 bucks.

So you had an electronic device from the early 1990's that you were still using until at least 2006 that still works in 2021?
Do you think the kids are really going to believe that?

Marshall's voice is perfect for this! Thanks for sharing, had not heard this.