[I originally posted this back in 2007, when the world and this blog were young. It occurred to me it is more relevant today than it was at the time -- for obvious reasons -- and so, with some slight re-writing, here it is again. Enjoy, in the intended black humor way. -- S.S.] 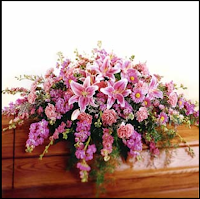 Well, it's Monday and you know what that means. Yes, my Oriental houseboy Hop-Sing and I...

Actually, I'm gonna break character here and get serious for a minute, so bear with me.

As Capt. Picard said in Star Trek: Generations, I have of late become acutely aware that there are fewer years in front of me than behind. Thus, perhaps predictably, I've started to have all sorts of dire thoughts about my iminent departure from this sad vale of tears. And one of the direst is that when I snuff it, my friends (assuming they've outlived me), will feel compelled to stage a memorial service in my honor.

So at this juncture let me go on record as saying, loudly and publically, that...

Really -- I dislike them -- and I say that despite the fact that, earlier this year, I attended a quite lovely one for one of my dearest and oldest friends, Floor Models drummer Glen Robert Allen.

Yes, I know mine is a minority opinion on this issue, and that most well meaning folks think they're a good and appropriate idea. But -- speaking in my capacity as the (sooner rather than later to be the) Recently Deceased Guy -- here's what I'd like you all to do if you feel you absolutely must stage something to remember me by when I buy the farm.

THROW A PARTY WHERE EVERYBODY GETS STINKING DRUNK OR HIGH ON THE POISON OF THEIR CHOICE AND HOOKS UP WITH SOMEBODY INAPPROPRIATE AND GOES HOME TO HAVE CRAZED WEASEL SEX!!!

Thank you in advance for your diligence in that regard.

But since this is, after all, a Listomania, here's a little competition that seems a propos:

[I should add that I've been agonizing about this, and I must stipulate that if after I've become worm fodder you still decide -- despite everything you've just read above -- to have a fricking public farewell for me, under no circumstances -- repeat, under NO circumstances -- play any music featured on the soundtrack to The Big Chill. I'm serious about this; if you should play such music, I will come back from the dead and do a poltergeist number on your sorry ass.]

So what's YOUR memorial song?

Oddly enough, mine is "Maybe in a Dream," the alternately elegaic and peppy pseudo baroque (mostly instrumental) Sopwith Camel track which can be heard here.

If you listen, I'm sure you'll agree that the mood of the thing just seems right. It's kind of like Pachelbel's Canon, except with really cool guitars and a backbeat.

Anyway, that's my choice (although it just dawned on me that I also would't mind Warren Zevon's "Life'll Kill Ya").

Here's one for you, Steve. Celebration, from the Young Fresh Fellows 1988 album, Totally Lost.

Another reason why Scott McGaughey is a musical God.

"Ripple," by the Grateful Dead, from their classic American Beauty. Its chorus, a type of haiku, is a how-to-walk-through-life while its verses speak to others about their own journies.

Your mention of Warren Zevon made me think of The Wind from his last album, but I think Glory - either the Television or Windbreakers versions, but not Lloyd Cole's (too engergetic) - would do nicely.

I don't even like it when there is no mail on Washington's Birthday, so forget about attending a memorial service...or worse...a wedding!

When I go, burn me up a quickly as possible, scattered my ashes all over New Orleans, or if that's inconvenient, throw me in Sheepshead Bay and play "When The Saints Go Marching In."

And for godsakes, don't take off work.

"The Other Shore," by the Austin Lounge Lizards.

Steve, at your memorial we'll play an all-Bowie program, of course.

Just to see you rise up from the dead and berate us all.

I'll be dead. What do I care? Hopefully I'll be reduced to a small container of ashes, and remembered fondly for a minute. Beyond that I have no thoughts.

Play "Repent Walpurgis" then dump half my ashes at Burroughs Sanctuary in Esopus, NY, and the other half behind second base at Yankee Stadium so I'll finally have the best seat in the house.

Even though I've abandoned the religion of my youth and have no interest in getting another one, I get an emotional charge from Drivin'n'Cryin's "Check Your Tears at the Door". But ya know, it won't have that kind of impact on anyone else and I won't be there to hear it, so the folks who want to mark my passing should probably choose their own music. paulinca's choice pleases me, for what it's worth. "Box of Rain" works, too. "Such a long time to be gone/And a short time to be there."