It Was 41 Years Ago Today

[For obvious reasons, here's my review of John and Yoko's DOUBLE FANTASY, from the March 1981 issue of the Magazine Formerly Known as Stereo Review (AKA Sound and Vision). This was the most difficult thing I ever wrote, so I was actually rather pleased to find upon re-reading it a few years ago that the only thing that embarrassed me were some dire predictions that (mercifully) didn't come true.

Two historical notes: At the time of the Smithereens reference, they were strictly a local NYC band; they wouldn't get a record deal or a hit for another four or five years. And that terribly sad photo of John and Yoko outside the Dakota is the same one that originally ran with the review.

I should also add that a few weeks after the piece appeared I got a very nice note from a woman (the now famous Freda Kelly) who had worked as a personal assistant to Brian Epstein at the height of Beatlemania. She told me that of all the reviews of the album she had seen, it was the one that most resonated for her. That meant a lot to me.] 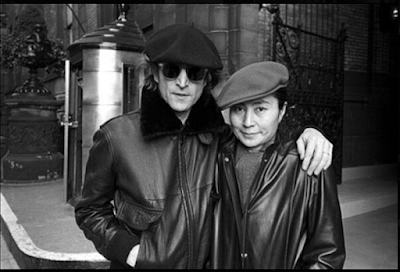 A few days after the murder of John Lennon, I was at a Village club listening to a wonderful Sixties-influenced power-pop band called the Smithereens. After the second set, the group came back for an encore and suddenly got very serious. "When I was a kid," the drummer announced to the crowd, "there were certain things that were cool. The Man From U.N.C.L.E. was cool. Robert Culp and Bill Cosby were cool. But Johnny Lennon...he was very cool."

As I write, it has been a week since Lennon was killed; by the time you read this, chances are that, unless we're really lucky, there will have been a commercial-cash-in rock circus on a scale that will make the Elvis Boom look like a P.T.A. bake sale. As a media event, his death has been unprecedented. The Russian invasion of Afghanistan, the upheaval in Poland and Iran, inflation, Reagan's election...who cares? They all pale into insignificance. 1980 will be remembered as the year a "wacko" (the word the police used) pulled off the first rock-and-roll assassination. And the tributes will continue. Endlessly. They will range from the genuinely moving to the merely fatuous and self-serving to the downright disgusting, but the end result will be the same: canonization. No matter how many sensationalist details emerge, no matter how many of John's old drug connections sell their memoirs to the newspapers, the last fall-out of Beatlemania will ensure that he's elevated to secular sainthood.

Well, John was a lot of things, but a saint he was not. By his own admission he was a bit of a bastard, and he well may have been; nobody gets to be one of the biggest phenomena in the history of show biz by being Mister Rogers. But I liked what the Smithereens drummer said about him because it's a perception that separates those of us who were there at the time (when he was, in Murray the K.'s immortal phrase, "what's happening, baby") from the younger fans who now haunt Beatles conventions and patronize Beatlemania touring companies. Those kids can't possibly understand that John Lennon was the coolest guy in the universe. Cooler than Elvis (dumb greaser!), cooler than Brando or James Dean or Lord Byron or Willie Sutton or Muhammad Ali or Cary Grant or Robert DeNiro or Bruce Springsteen. Cooler than Elvis Costello, even. Not to mention Travolta and the Fonz.

Understandably, this is an aspect of the man that has gotten lost in the shuffle. Right now, in the face of the pointless loss many of us feel, he's being painted as the most wonderful, warm, caring human being who ever wore shoe leather. But cool is closer to what he was. He had wit, style and songwriting genius. He invented the world's most exclusive men's club and made millions of dollars thumbing his nose at the Establishment. He gave countless people joy and in the process changed the world a couple of times, substantial achievements whatever your background might be. I can't think of a neater role model for a teenager and I can't think of my own adolescence except in terms that he defined.

HIS musical accomplishments will probably be debated endlessly. The lingering, mindless fan clamor of the last ten years has done a great deal to cheapen his reputation, and there has been the inevitable critical backlash (ironic when you consider that all us rock critics owe our very jobs to him, for there wasn't any such occupation to speak of before the Beatles). The punks, by and large, have no use for him, though I was delighted to find out that John, for his part, got off on the Pretenders and the B-52s. My guess is that in the long run it's his early stuff -- through, say, Beatles VI -- that will hold up best; in fact, my personal tribute, in response to the gentle homilies of "Imagine" that saturated the airwaves in the wake of the tragedy, was to blast the teenage lust of "Anytime At All" and "You Can't Do That" as loud as I could, and to hell with the neighbors. But his finest work, I think, which includes the first two solo albums and the 1975 Rock and Roll set, constitutes an achievement as personal and innovative and moving as can be found in the history of the music he helped shape. If it takes a senseless crime to make people remember what John accomplished, well, that's unfortunate, but it's also the way of the world.

As for Double Fantasy, the comeback record that now becomes his artistic farewell: in honesty, I hated it before he died, and now that he's gone I find listening to it all but unbearable. The simplistic celebrations of the the love that he and Yoko felt for each other and for their son seem, in retrospect, too painfully sincere to take: the cruelty of his ending intrudes too much. Musically, it shows that he hadn't completely lost his touch. The voice was still thrillingly intact; it's worth mentioning that John Lennon had perhaps the most hauntingly expressive voice in all of rock-and-roll. At least two of the songs -- "Watching the Wheels" and "Woman" -- are, on a melodic level, as fetching as some of his lesser Beatles efforts. Yoko's stuff strikes me as precious. The vaguely trendy "Kiss, Kiss, Kiss" could pass for a minor British New Wave pop hit, and whether time has vindicated her earlier avant-gardisms (as John was convinced it would) I will not venture to guess. The kindest thing to say about Double Fantasy, all in all, is that it wasn't designed as a rock record and shouldn't be judged as one. Its music is what the industry calls Adult Contemporary; I don't think it's successful even within the confines of that bland genre, but I can see that some kind of case could be made for it.

ROCK-AND-ROLL deaths tend to turn quickly into shopworn metaphors of one kind or another -- think of Altamont or Janis Joplin -- and there will doubtless be attempts to grasp some "larger" meaning behind the sad events of December 8. There has already been a spate of "The Sixties are finally over" pronouncements; John, of course, tried to point that out to people ten years ago, but then artists are always ahead of the crowd. Beyond that, what can one say? That we should boyott those who would turn his death into a commercial venture? We're all of us ghouls to some degree; being fans, how could we be otherwise? The Lennon Industry will continute to alternately fascinate and repel us; there will be dignified historical retrospectives and shameless mawkish reminiscences, scholarly rummaging through the tape vaults and flagrant rip-off repackagings. The well-meaning and the jackals will together compete for our attention as long as people remember. There's not much that can be done about that. As for the pain we feel right now...well, Pete Townshend once said that rock won't help you forget your problems, but it will let you dance all over them. That advice seems worth remembering. — Steve Simels

Steve,
Very glad you wrote that review in the first place, and very glad you chose to re-post it today. I think that many of the observations/criticisms in it are still accurate today, and I applaud you for being brave enough to point out that, although there is obviously much to admire about Lennon's life and art, he was human like everyone else, and human beings are frequently flawed, inconsistent, contradictory - sometimes maddeningly so. You and I and most of the people who read this blog may think that's pretty obvious, but it disturbs me to this day how many people are willing to worship mindlessly at the altar of celebrity.

I'm still processing John Lennon's life and death 41 years later. The "Get Back" documentary adds to the puzzle without leading to any final conclusions. He was way to complex to lead to any conclusions.

Let's just celebrate "You Can't Do That" & "Strawberry Fields" forever!

Steve: It is an amazing piece you wrote about the times and events around the death of John Lennon. It showed the best and worst of us.

Though I often can't remember where my car keys are, I do remember that magazine article well. It was nice to be able to read it again and I look forward to your collected works.

Nice tidbit about the Freda Kelly note too. I think that puts me (through you) 3 degrees of separation from the Beatles!

Yup, you nailed it. With insight and style. Darn good writin', Laddie.

I'd be interested to know why you think John's early stuff will hold up best. Is it because he was still writing together with Paul? Because he wasn't yet out of his mind on acid? I have to say I tend to agree
with you -- though, come on, you have to include his songs on Rubber Soul as among his best work! (Aside from Run for your Life, that is.) Not that he didn't write some great songs after 1965...

Thanks Steve.
You helped a then fifteen-year old me feel like an adult when reading your piece.

I was a huge Steve fan during his time at SR. Where I was and at my young age it was like someone took up the mantle of Lester Bangs. The insight and the taste resonated with me. This article is in a nutshell a good reason why. I think Steve nailed it much more than not.