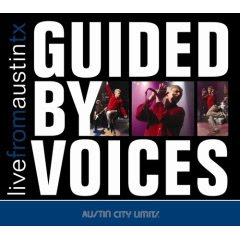 This has been out for a couple of months, but I finally got around to snagging a copy of Guided by Voices' contribution to that hallowed rock and roll tradition, the two disc live set. Live From Austin, TX CD catches the band at one of the last gigs on their Electrifying Conclusion tour in 2004. I have long been a sucker for GbV's music and Bob Pollard's rock n' roll readymades can evoke Wire one moment and The Who's arena rock bombast the next. Toss in a little Captain Beefheart agit-pop for good measure and you have a listening experience that never fails to captivate.

Admittedly to me, a live Guided by Voices disc is a somewhat difficult concept to wrap your head around. In person, a GbV gig is all about the boozy bonhomie of a room full of fanatics with encyclopedic knowledge of the band's voluminous discography who can tell you in a instant that the last tune they played was from their Fast Japanese Spin Cycle EP. It's an affirmation of the primal power of our rock and roll roots and a reassurance that, as Bob says during this show, "you can suck and still rule." But, how does the Guided by Voices live experience translate to polycarbonate?

Live from Austin, TX features 30 tracks spread over two CDs that survey the band's best songs from 1989's Self Inflicted Aerial Nostalgia to the final Guided by Voices CD Half Smiles of the Decomposed. Ultimately, it's an excellent career retrospective played by the last, and perhaps best GbV lineup which included the stellar guitar work of Doug Gillard, formerly of the underappreciated Cobra Verde and Death of Samantha, as well as second guitarist Nate Farley, bassist Chris Slusarenko and drummer Kevin March. On this night, the band attacks the GbV back catalog with a vengeance but unfortunately, the bottomless beer cooler that served as an omnipresent stage prop during GbV's life gets the better of the group midway through the second disc. Faster than Ann Althouse going through a box of white zinfandel the performances begin to unravel, culminating in a well-oiled rendition of Glad Girls that recalls the vocal stylings of Foster Brooks rather than Roger Daltrey. Live, Guided by Voices was always a high-wire act that sometimes missed the safety net, but it's that ever-present possibility of crash and burn that made their shows compelling and transformed Bob Pollard from rock and roll's Walter Mitty to a legit alterno-hero.

This performance was also released on a companion DVD and I see that my local PBS channel will broadcast it on Austin City Limits July 28th (check your local listings). Regardless, the CD or DVD is a must for the GbV fanatic who wants an artifact of the last performances of this important and influential band.

Am I sorry that Guided by Voices packed it in? In retrospect, Bob's decision to fold the group was the right one given his post-GbV work which includes the wonderful From a Compound Eye and his excellent collaboration with Tommy Keene entitled Blues and Boogie Shoes. There is no doubt that he will continue to make great music outside the Guided by Voices moniker. If you are interested in sampling some of his solo work, a good place to start would be Crickets: Best of the Fading Captain Series, 1999-2007, slated to be released on July 17th. Get it at your fave rock and roll outlet.

Posted by Kid Charlemagne at 9:00 AM

Well, that I definitely have to hear.

KC -- I had an idea. From now on, when you you're going to be posting a major opus like the GbV piece, e-mail me a heads up, so I know its coming and I don't unwittingly crimp your style with a tiny little pischer item like mine above. I felt terrible...

No worries mate. They both still load on the same page. It's a good idea, and I will in the future and I hope you do to. I always worry about stepping on one of your posts.