Garage Bands of the Gods 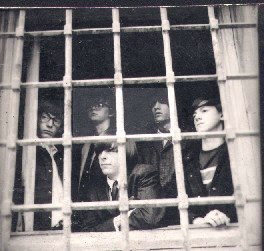 Our younger readers will have to take this on faith, but unlikely as it now seems, it is ineluctable fact that in the immediate wake of The Beatles and the original British Invasion, every town, village or municipality in this great land of ours also boasted at least one garage band formed in emulation of the English and American acts we were seeing on TV. Some of these teen combos -- which seemed to spring up almost literally overnight -- were pretty good (and some of their members would go on to real musical careers), some of them were mediocre, but most important, some of them -- if they had affluent parents -- were able to sport the same clothing and equipment that the bands on The Ed Sullivan Show were wearing and using.

Oh, and (of course) many of these groups also recorded one-shot singles, featuring their own songs, for local labels, which is why there are now something like five zillion CD compilations with titles like Wails From the Crypt: Fulton County Garage and Punk 1964-67.

Anyway, like I said, almost every town in the country had a band like I've just described, but for me the one that best exemplified the ethos (or the movement, or what have you) is the one that ruled the area around Lake Forest College in Lake Forest, Illinois, when I was a college freshman. To wit: The Bryds. As in The Byrds, but with the letters cleverly reversed so that it was pronounced The Brides. Heh heh.

Not to mince words, but these guys were pretty much considered gods in the neighborhood, and when I finally went to see them -- at a dance at Waukegan High School (Waukegan being Jack Benny's old home town, BTW) sometime in late '65 I was pretty much blown away. The Bryds had the hair, the musicianship, the attitude, the Vox amplifiers, and -- have I mentioned? -- the attitude; they may not have been The Beatles or The Rolling Stones, but as far as the several hundred kids crowded into that high school gym that night were concerned, they might as well have been. Like I said, I was blown away -- and yes, jealous as hell, given my own participation in a bunch of rather not so great bands at the time.

In between sets, I also bought a copy of the band's indie 45 (see below), which I believe was getting airplay on AM radio powerhouse WLS at the time, although I may have dreamed that. Alas, I lost my copy sometime in the late 70s; I have since learned that it's fetched between five and eight hundred bucks on eBay. 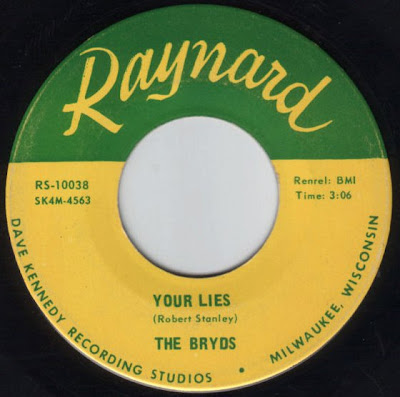 As you can hear, the song makes all the right obeisances to The Kinks and Paul Revere and the Raiders, which is the game that was being played at the time; in any case, I remember that a live version of it went down a storm at the show I attended. I also remember that half way through the band's set, a circle of kids suddenly formed and in the center were two angry teenage girls going at it on the floor tooth and nail. This was the first time I ever saw what they used to call a cat fight, actually, and to say I was somewhat taken aback by the experience would be an understatement.

Incidentally, I had always assumed The Bryds were, in fact, from the extremely well-to-do suburb of Lake Forest, but Jim Stanley, brother and sometimes bandmate of Bryds frontman Bob Stanley, has informed me that this was the not exactly the case.

"So far, everything I've read about the Bryds has had wrong information. But NO, they weren't from Lake Forest. The original 5 piece group had two guys from North Chicago, one from Waukegan, one from Deerfield, and one from either Libertyville or Lake Forest."

Okay, for more information on The Byrds and their various off-shoots over the years (and it turns out that there were lots of them, and some pretty interesting ones at that), check out the official homepage over here.

Jim has also asked me to mention that you can listen to a few tracks from Bob's new CD Roadman's Hammer -- and order the whole thing, of course -- over at his myspace page.

Done. And thanks for the memories, guys. You totally rocked.
Posted by steve simels at 12:01 AM

Killer tune. Must have been something in the water in Lake Michigan 'cause The Bachs were another great local band out of Lake Forest.

A huge song, to my ears, and just straight up my alley. I love the Just Like Me riff & the vocals are quite great -- you can almost hear the high school gym echo, which is a great echo for rock 'n roll. Thanks as always, Mr. Simels. Once again I never would have heard this but for usted.

I remember this single being in your record collection. And I never played it. Alas, the foolishness of youth...

This band had a reunion gig in 2008at GreenBelt Forrest Preserve in North Chicago. Four of the five original members showed. It was awesome!!! They are still rockin' and have really improved their skills. They need to have a reunion every year!!

Uh, apparently the link to the Bryds homeage was screwed up; just fixed it.

There's some cool stuff over there -- you should check it out.

THE ORIGINAL GIRL BAND, the IN-SEX

Uh, more details please. I think I need to know about them...

I'd like to thank you, Steve, for your comments on the Bryds. One of the guys WAS from Lake Forest and we hung out in LF often.
I wish I still had my Vox AC-30. One thing I want to make clear, the song Just Like Me came out a year after Your Lies. We referred to it as Just Like Us. It was a fun time
Thanks also for mentioning my album, Roadman's Hammer.

hey! that's my dad! i finally got to play the song for my children thanks to you. they had a hard time believing that it was their grandpa bob.

I was fortunate enough to have attended the Bryds / Outspoken Blues reunion in 2008, Thanks to Bob Johnson letting me know. What a nice trip down memory lane. The weather was perfect; the crowd was great and the music was excellent. I hope that there's a another reunion coming in 2010.

The Outspoken Blues/Bryds used to hang out together when we could. We were friends, and my brother was in the Bryds. The 2008 Blues/Bryds reunion was a lot of fun. I missed the band members who had passed on, and those who weren't able to join us. We've had so many requests, we'll try to do it again in 2010!

I remember The Brydes very well.

When Frank Laurie's family moved to Springfield, he formed another group -- The Shy Guys -- who were immediately the best group within a hundred miles.

Tooling around in his red 65 Mustang convertible, with that Vox amplifier and a Gibson hollow-body in the back seat, Frank was an inspiration to a generation of local kids. And he was no more than 17 at the time.