A Screaming Comes Across the Sky...

From 1952, please enjoy Spike Jones and the City Slickers and their, er, remarkable version of "Deep Purple." 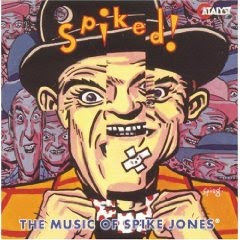 That's a fairly obscure Jones track, and I first heard it on the compilation above, from 1994; believe it or not, it was released on Catalyst, RCA's now defunct (I think) avant-garde classical subsidiary. Tim Page (a former NYTimes classical crit who ran the label) tried to package Jones as a sort of post-modernist before the term existed, which is not as far-fetched as it might initially sound, and in any case there was a lot of that kind of stuff going around at the time, if you'll recall things like Warner's The Carl Stalling Project and the concurrent Raymond Scott revival.

In any case, they got none other than Thomas Pynchon to write the liner notes for the collection, and while on balance it was a swell essay, I'm not sure I agreed with every point.

Jones's music "will require the sort of listener who either wants to wince in embarassment or can find in vintage bigotry quaint refuge from the more virulent forms encountered in our own era...'Deep Purple,' featuring Paul Frees's impression of Billy Eckstine, will offend Afro-Americans because the singer keeps nodding off, implying narcolepsy not in the public interest."

Maybe this is one of those rare occasions when I'm actually too young to get something, but I really don't hear the above as racially offensive, and in any case, most people listening to it today will probably have no idea that it's a parody of a once famous black crooner. To me, it's just an incredibly relaxed singer trying to sing a sleepy ballad without nodding off, which is kind of intrinsically funny, and I suspect it was back in '52 as well.

On the other hand, Pynchon's a genius, so who am I to argue?

I should also add that Paul Frees, who sings the above, was of course the absolutely brilliant comic impressionist and actor today most famous for having provided the voice of Boris Badenov on Rocky and Bullwinkle, but who worked with Spike Jones a lot. That's him below doing the Peter Lorre parody on my personal favorite Jones track, "My Old Flame."

Thanks for that. A fun, noisy start to a drab Monday.

When I hear "post-modern" I think 1980s, especially the mostly awful architecture which ruined many a skyline.

Loved the Carl Stalling Project. Spike is always a hoot to listen to.

I don't think the cut is offensive either. Pynchon may be a genius, but he's also a thin-skinned eccentric.

Pynchon is full of crap.

For crying out loud, people, he's not Lady fricking Gaga.
:-)

The Peter Lorre vocal is also a spoof of Ted Lewis' version of My Old Flame.