Songs the Beatles Gave Away: An Occasional Series

From September, 1968 -- and one of the initial four single releases on the then fledgling Apple Records -- please enjoy Jackie Lomax and his rendition of the swell George Harrison tune "Sour Milk Sea." 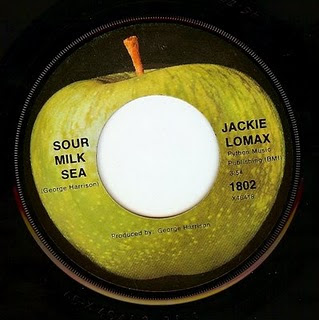 Lomax was the very soulful frontman for Liverpool beat group The Undertakers, a bunch that never made much of an impression over here, but who as you can see dressed kind of interestingly. In any case, this is an absolutely kick-ass track, which is not particularly surprising when you consider who's in the superstar backing band. That's Paul McCartney on bass, Ringo Starr on drums, Nicky Hopkins on piano, and on guitars -- trading solos, no less -- both Eric Clapton and the song's composer. Frankly, I've never understood why this wasn't a hit.

Oh, and for the record, the other initial Apple singles were the Fabs' "Hey Jude/Revolution," Mary Hopkin's "Those Were the Days." and "Thingumybob" by The Black Dyke Mills Band.
Posted by steve simels at 12:00 AM

I am all over this like a bear on honey. The chunky sound would have fit right in on the White Album. And when the organ comes in with the guitar solo it goes to whole 'nother level.

Being one of those Beatles geeks who has all of the Apple singles on vinyl this has been on my "list" for a long time. Mr. Lomax's Apple album is pretty darned good too.

It has always been odd to me that the Apple artists other than the Beatles had a terrible bad luck streak. This song definitely should have been a hit.

And the b-side, another Harrison song with the same instrumental lineup, was just as good.

No mention of how it's a rewrite of "Savoy Truffle?" (Or is it the other way around?)

A lot of the Apple artists were bogged down just by being Apple artists -- I think the whole Apple roster was seen as a gimmick or self-indulgence by the Beatles and everything on Apple was treated with a lot of skepticism.

Great tune... really rocks out. can't believe i never heard that back in the day, that should have been all over the radio back then. Thank you...and thanks for all the wonderful posts, I learn a lot at this site and get to hear all the great stuff I missed, and the great stuff I forgot about. Good Work Steve!