If it Weren't For These Guys, Obama Wouldn't Be President

It's official -- the greatest rock song of the decade is, without question, by The Dirtbombs.

From their 2004 album, Dangerous Magical Noise, please enjoy the obviously sublime on so many levels "I'm Through With White Girls." 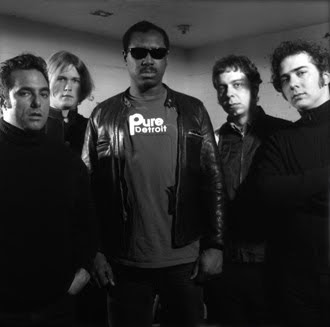 Seriously, these guys are what Arthur Lee and Love probably would have sounded like if they'd been born twenty years later and in Detroit instead of LA. Come to think of it, between them and their contemporaries/pals The Detroit Cobras, I'd be hard pressed to think of a better rock band anywhere.
Posted by steve simels at 7:50 AM

I do love me some Dirtbombs. I'm partial to "Your Love Belongs Under a Rock," but this'll do for a Monday morning. Dig the semi-inept yet perfect guitar solo.

I love both of those. Actually, the whole Electra Glide in Blue album is to die for.

It's a small fan club, apparently.

Aw, i just been travelin' & workin' my ass off -- and not proud of it, either. But this is great & so truly reminiscent of the Detroit Cobras -- one of the very, very few and probably only bands i apparently was into before Senor Simels (but only because an (ex)friend demanded that i give them a listen, and she was as she often was, right.)

Right as usual Steve. This band is incredible, but you don't know the half of it unless you've seen them live. Saw them at Johnny Brenda's in Philly with Mondo Topless (one of my Top 5 band names of all time, The Swinging Love Hammers being #1) and Kelley Stoltz. The best $15 I ever spent.