Compare and Contrast: Those Star-Crossed Lovers

So a couple of weeks ago, while I was obsessing over the Keith Richards book, I believe I mentioned that I was a fan of The Inmates, the rootsy early 80s Brit punk band that had small hits with covers of "Dirty Water" and "Talk Talk" and, more to the point, had done a fabulous version of the early Mick and Keith beauty So Much in Love.

However, that wasn't strictly true; what I should have said is that I was a fan of the band's first two albums, which were the only ones I'd heard. So I was pleasantly surprised the other day to come across their fifth long-player -- aptly titled Five -- from 1984, which has a) never been available on CD; b) features Barrie Masters, of Eddie and the Hot Rods "Do Anything You Wanna Do" fame filling in for usual lead singer Bill Hurley (who was apparently ailing at the time); and c) includes a pop-punkish cover of "Just Like Romeo and Juliet," the wonderful 1964 proto-soul hit by The Reflections. 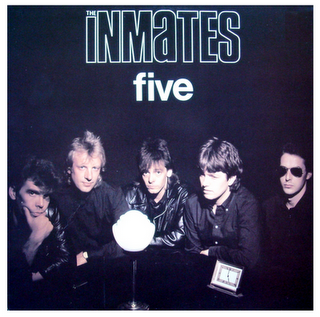 And, of course, because I'm that kind of guy, here's The Reflections version.


For the record, as it were, this is one of those cases where I think on balance I prefer the original. The Inmates cover has a lot of pep, as they say, and I'll bet it worked like gangbusters on stage, but the Reflections take just has more of that 60s R&B tenement romantic yearning. Incidentally, the Reflections themselves were a bunch of white working class guys from Detroit with roots in doo-wop; the wonderful backing on the record was the work of a bunch of moon-lighting studio cats from the Motown house band at the time.
Posted by steve simels at 8:06 AM

Bet it would have been spectacular if it had been recorded using more modern methods.

Even so, the remake is a serviceable translation and, as you say, would have been a lot of fun live.

I love this blog because I tuned out of music for a while in the 80s and 90s and this place ties it all back together for me.

My iPod is richer for the existence of this blog.

No cover of this song comes close to the original,with its complex drum, piano, handclap rhythm.

I know that in preparing my own lousy version, I had trouble figuring out final line of the lyrics to the (truly sensational) bridge. Eventually, I figured it out to be "I'm gonna put Romeo's fame, right, smack dab out of date (ooh-ohh)". The Inmates get it wrong.

Well, I'll be damned. I've never quite been able to figure that line out myself -- thanks for clearing that one.