Okay, the short version (and for god sakes, when you finally listen to this, play it on a system with decent speakers):

Last year, Andy Partridge of XTC did a high-end vinyl snob remaster of the band's 1986 Todd Rundgren-produced masterpiece Skylarking. Released on his own boutique label, the new version was spread over two 12-inch LPs and cut at 45 rpm, and I must confess at the time it came out I had pretty much zero interest. Despite being a huge fan of both band and album, and despite having toiled for my entire professional life at an audiophile/gear head rag (albeit a mass market one) I am as far from being an analog purist as you can get, and my reaction to the availability of the set can be pretty much summed up with the phrase "meh."

Until, that is, I chanced across a needle-drop transfer of "Earn Enough For Us," my favorite song from the record, and learned that all previous vinyl and CD versions of the album had, inexplicably, been issued with the polarity reversed or out of phase (or some such audiophile mumbo jumbo) and consequently featured a rather thin and pinched aural soundstage (a defect now corrected on the vinyl release). How this grievous oversight had escaped producer Rundgren's attention for all these years remains an open question, of course, but anyway that was the claim.

And here's the aforementioned needle-drop, by way of proof; cliche or not, it really feels like this is the first time I've actually heard the damn thing. 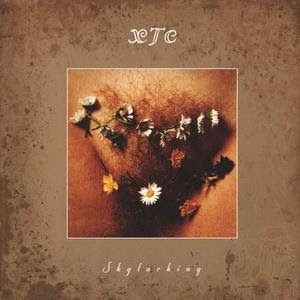 Al Kooper famously described the first Blues Project album as sounding like it had been pressed on one of those cardboard inserts you used to get when your shirts were drycleaned. Which kind of sums up the way my older copies of Skylarking now strike me.

I should also add, and for the record, that on the basis of the above it's pretty obvious that Colin Moulding is one of the greatest and most underrated bass players in fricking rock history.

Agreed about Colin. Some very tasty McCartney-esque playing by him on this disc.

Add Bruce Thomas of the Attractions to that list too.

You can get it in the US, too. Amazon, natch.

I actually pre-ordered this from Amazon UK. I HAD to have it. It took forever to arrive and when it did, it was cut WIDER than the average LP. My platter does NOT turn. The fucking record is TOO wide.

Blank Frank saved my life, and boy are you correct about Colin. I never knew just how amazing the bass line was on "Summer's Cauldron" until this release.

Blank Frank is a gift to music lovers everywhere. I downloaded this yesterday -- it may be my favorite album of the 80s and in terms of production it is to the 80s what Abbey Road was to the 60s and Dark Side of the Moon was for the 70s -- the standard by which all others are measured.

steve,
Ask BG, but when we saw Redd Kross at Southpaw, I was about 90% sure I was standing behind Moulding, dapper in a dark wool trench coat. We discussed the likelihood of this with watertiger, and came to the conclusion that there probably aren't a lot of people who would stop him on the street. But I was too shy to ask. (Yes, there are things I'm too shy for.)

Hmmm. Having recently acquired a turntable, this is calling to me.
As a notably out-of-touch person, I appreciate you bringing it to my attention.

The picture on the back of the album...errr...ok,I'm afraid to ask.

Converse,
I'm just assuming it's thing we did on Grass.

How funny...I just DL'd this yesterday from BF. Haven't listened to my vinyl copy in years, but I'm really curious to know if it was simply remastered or remixed as well. Either way, it's simply stunning.

Gotta get this one. The vinyl remasters done of Elvis' first records are wonderful, and they are not cut at 45 rpm.

Glorious, even on a Mac laptop - sorry, can't do better at the moment. Bouncing back and forth from the older CD file to this new version, I'd say it's a remaster, not a remix, but clearly a great improvement over the old, hashy digital. Now, Steve, perhaps you can summon the ghost of Julian Hirsch to give us the numbers...

If I recall from the "Rundgren in the Studio" book, the only cut recorded live in the studio w/ the full band...and noticeably so, at least to my ears. The rest of the record was initially recorded to click-track, with Prairie Prince dubbing the drum parts later.

Yeah, incredible bass playing, but it's made possible by PP's deep-pocket stickwork.

This mix is amazing. I want it lossless, and with headphones on.

Wonderful to think back to music of the '70s, listening to NYMary, Susie Madrak, Will Bunch, Charlie Pierce, Andrew ? talking music....and then reading along.

Ya know, XTC is one of the few bands that really counts in this world.