Well, as you may have heard, the entire '60s album catalog of The Kinks is getting the deluxe reissue treatment via Sancturay/Universal this year, with The Kinks, Kinda Kinks and The Kink Kontrovery up first.

All of those are essential artifacts, of course, and of transplendent interest to anybody devoted to the genre which comprises this blog's raison d'etre. I myself, however, am pining in particular for the sublime 1966 Face to Face, which is due out in July. And not the least of the reasons are the following sleeve notes, from the original LP, which I have been looking for on the intertubes since forever, and which I reproduce now in full.

It has been said by mercenary-minded persons that upon setting out along life's road the bread, the filthy lucre of W. Shakespeare of highly regarded memory, would seem to be the thing to go for.

So if you accept the opinion of these aforesaid persons in the spirit in which it is given and get cracking you get the loot.

So far on your passage through this vale of tears you have been a hick, a nothing and an unheralded nobody. To be a well respected man must be your next aim, and with the loot in your pocket and the wicked world being what it is, you become a well respected personage ere you know it.

Then comes dedication to the dictates of fashion. The Carnaby Street. The striped natty suiting. Touches of velvet upon the collar. Touches of lace upon the underwear.

And of course ties of polka dot and Persian-originated Paisley pattern.

Next? Country house, yacht, powered by sail and/or steam, with the motor car in lurid colour and with white walls to its wheels smiling in the golden gravel drive.

Ladies of course. Ladies with long legs and little bosom, hair the colour of corn, very mini, very skinny dresses. Status symbol ladies with rich dark sheen in the depths of the skin.

Dwindling in the end to one lady, one Special who gets in among the soul.

The trouble being that the perfect woman becomes a bore, like having Venus de Milo constantly upon one's hands.

So angry words are spoken, and she of golden hair and mini skirt, half woman, half thighs leaves. With car. Back to ma and pa. With tales of drunkeness and cruelty.

As if this is not enough, fate flings its last custard pie.

And you are left with the glass of ice cold beer, and the sun on the uplands with dappled shadows and all, which is much better, as the poet has it, than a poke up the nostril with a burnt stick. 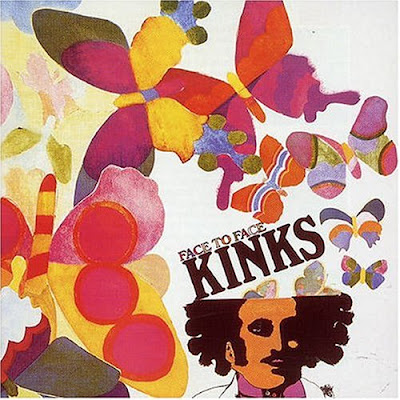 Raymond Douglas Davies, a musician, not forgetting David, his hith and kin,

Peter Quaife, bass guitar who once wrote a story about an embarrasing affliction from which Ray's grandfather suffered for over forty years,

And Michael Avory, drummer and the possessor of four shoes, two for each foot,

have continued the story. And stories parallel to his sad one.

About the frustration of the telephone, About rainy days and sunny days, about sessions men and dark ladies, about P.V.C. grass skirts in Waikiki, about memories, and dandies, and most of all about the breadwinner who was in the beginning, who lost all, sold his most exclusive residence, and passes into the bosom of his fathers. -- Frank Smyth

That's just lovely; in fact, I can't think of another jacket essay even half as perceptive, funny and poetic.

I'd long assumed that "Frank Smyth" was a pen name, but as it it turns out, he was a real person and a long-time publicist for the band. According to a posting Ray did at a Kinks fan board a while back, the head Kink had lost track of him (after dismissing Smyth and a partner over some imagined slight circa "Lola"), but around the time of his late 90s The Storyteller tour, he tried to get in touch with the guy -- to verify some 60s stories -- only to find that he had just died.

I was also surprised, recently, to learn that Ray absolutely hated the album cover back in the day; thought it was too psychedelic or something. That's as may be -- it certainly has a Yellow Submarine vibe -- but I still think, as I did in 1966, that it's utterly charming and apt.
Posted by steve simels at 12:24 AM

Thanks! Always loved that record ... "Hello? Who's that speaking, please?"

If there's one thing I miss about vinyl, it's the large covers with their wonderful artwork and liner notes.

However, I am seized up wondering if there was anything they could do to make those records sound better. Particularly the early stuff - has always been a bit dicey, sound-wise.

Time'll tell, I guess. Certainly nothing bad can come of this.

Face to Face has always been a very nice sounding record. The earlier ones are uneven in that regard, although the first one is in genuine stereo, for what that's worth.

Gosh, I’ve been looking about this specific topic for about an hour, glad i found it in your website!

I think I have about 5 reissues of this album already. Nothing succeeds like excess, excess kink included. Will the sleeve be clove scented :)

What a lovely thread. My fave Kinks album always alternates between Face To Face and Village Green.

And those liner notes are fantastic. Hadn't looked at 'em in years, but "The taxman cometh" has always stayed with me.

Frank Smyth, we salute you!