Night of the Not So Living Dead 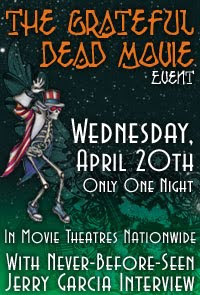 The critically acclaimed cinematic concert rockumentary, The Grateful Dead Movie will take audiences back to the ‘70s for a one-night in-theater event on Wednesday, April 20 at 7:30 p.m. local time. It will be presented in 540 movie theaters nationwide, including 25 movie theaters in the New York area.

Under the direction of the band’s lead guitarist Jerry Garcia and co-directed by Leon Gast, these legendary 1974 concerts capture the Grateful Dead at the pinnacle of their psychedelic worldwide fame while documenting the Dead Head experience. During this NCM Fathom event, theater audiences will also be the first to see exclusive, never-before-seen interviews with both Garcia and Bob Weir that were captured during the filming of this historic production.

The Grateful Dead Movie was shot during the legendary band’s concerts at Winterland Arena in San Francisco in October 1974, prior to the Grateful Dead taking a two-year sabbatical. This special in-theater event marks the first time the film has been available in wide theatrical distribution since its initial release in 1977.

Tickets for The Grateful Dead Movie Event are available at participating theater box offices and online at www.fathomevents.com.

I'm more or less agnostic about the Dead (although I will stipulate that Workingman's Dead and American Beauty are great records) but I've never seen this particular film, and in any event I have no idea if fans think it documents a either an inspired performance or a great period in the band's history.

That said, I've been looking for an excuse to post the following (unreleased 1992) song for ages, so a big tip of the Hatlo Hat to Fathom for giving it to me. 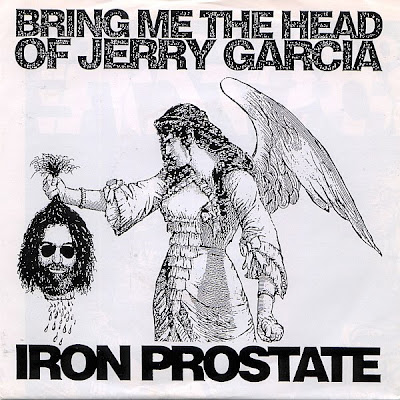 Iron Prostate were (are?) a wiseguy NYC punk band who made a very smart album on Skyclad -- Loud, Fast and Aging Rapidly -- a year earlier; if you can find a copy, I recommend it highly. As for the song itself, I thought it was funny at the time, although obviously it's less so given what happened to Captain Trips after it was recorded.

I should also add that it was produced by -- swear to God -- Meat Loaf auteur Jim Steinman.
Posted by steve simels at 7:14 AM

Stipulating that Workingman's Dead and American Beauty are great albums is not agnostic, but simply the only sane, Episcopalian view it is possible to take on the Dead (also a couple of good songs on their very first album). Everything else is pure religion that miraculously transmutes an awful bar band into cultural avatars.

"He needs two drummers just to find the beat."

Heh. And I say that as a Dead fan.

The Grateful Dead Movie is a good, not a great, movie. Improvements in technology since it was released have made some of the edits and overdubs really obvious and that can jar you right out of the music. Some of the rhythms are awfully slack, as was always the case with the Dead. Musically, the high point is probably Eyes of the World.

But some of the interviews -- Phil Lesh's, especially, as he plays with feedback from his bass and the movie camera -- are delightful, as is the opening cartoon (though the animation is very limited).

You'll notice there is no interview with then keyboardist Keith Godchaux. Supposedly he was so wasted they couldn't get anything at all coherent out of him.

The vocals in the verses remind me of Eric Bloom of Blue Oyster Cult.

I remember seeing this a couple of times at "midnight movies"... I remember the opening animation, but beyond that...!

Is that the movie that starts with "Touch of Grey" and the dancing skeletons?

Brooklyn Girl, it starts with a trippy Uncle Sam skeleton on a motorcycle segueing into U. S. Blues.

What Gummo said: a good, not great, movie. Many high points, none of them involving Donna Jean.

That animation was big fun at the time and ate up a ridiculous fraction of the total budget of the film. It's the same kind of milepost for how much the state of the art has advanced as the special effects in Star Wars.

As a confirmed Dead Head, I'd call the concert footage meh - not awful, but this was a band about to go off the road for a couple of years because they were sick of it and it showed.

I hope nobody thought scheduling this for 4/20 was clever.

Man, I'd rather have an XM channel devoted to Iron Prostate than to the Dead any day. (No agnostic here!)

So will the theaters have special ventilation working that night?

There is absolutely nothing "legendary" about the performance in this movie, except for the fact that over subsequent years they continued to get worse and worse, adding a kind of retroactive gloss of relative quality. And I remember the interviews as fatuous and self-satisfied, but not in a good way.

Workingman's Dead is an acceptable album, a solid B+ and far and away the tightest and most interesting music they ever recorded. American Beauty has some nice tracks.

I have nothing of interest to say about the Dead, but do let me comment here that back around 1981 I could always tell when a Jim Steinman-produced record came on the radio by the way it made my ears bleed.

I was one of the guitar players in Iron Prostate.

This record was not produced by Jim Steinman; he did some demos with the band after I was out. If I remember right, it was done by Jim Fourniadis.

If you listen closely to the intro, you can hear the hook from "Dark Star." And the B-side was a cover of Jefferson Airplane's "Volunteers."

Iron Prostate, formed around 1989, included former members of Ed Gein's Car and False Prophets. It broke up a long time ago.
--Steve W