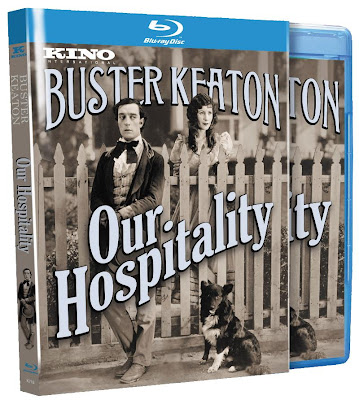 Video Event of the Week: Might Kino/Lorber's DVD of Two in the Wave, Emmanuel Laurent's fascinating documentary look at the sometimes stormy relationship between the great French filmmakers Francois Truffaut and Jean-Luc Godard, be what we're talking about? Is Kino/Lorber's Blu-ray of American Grindhouse, Elijah Drenner's eye-opening and often hilarious look at the history of exploitation filmmakers and filmmaking, by any chance a serious contender? Or might Kino/Lorber's respective disc versions of Genius Within: The Inner Life of Glenn Gould, a director's cut of one the most interesting portraits of a great and wildly eccentric artist in recent memory, conceivably be The Ones?

All worthy, to be sure, especially the Glenn Gould flick, although if truth be told American Grindhouse isn't actually out yet. Nevertheless, for my money it absolutely has to be Kino International's absolute fantastic new Blu-ray version of Buster Keaton's brilliant 1923 comedy of Americana Our Hospitality.

Keaton stars as Willlie McKay, a youthful dreamer living in 1830 Manhattan (the first shot of the city back then will blow you away, BTW) who travels westward on a rickety train thinking he's going to claim his birthright, which turns out to be a shack rather than the mansion he'd imagined. Worse, the object of his affection (Natalie Talmadge, Keaton's real life wife) is part of a family that, unbeknownst to McKay, has had a decades long blood feud with his. It all works out in an amazing and ahead of its time mix of slapstick, melodrama and spectacle; the opening train trip, for example, is fifteen or so minutes of sustained comic invention that will have you laughing till your sides hurt, and there are several other big set pieces, including a famous waterfall rescue sequence, that must be seen to be believed.

Here's a clip -- which doesn't look as good as it does on the Kino disc, and features rather cheesy musical accompaniment (see below) -- but which will give you a pretty good idea of the film's ineffable charm nonetheless.

The new Kino version, tinted where appropriate, comes from a print in mostly very good condition, and of course there are some interesting bonuses, including the 1925 short The Iron Mule (which finds amusing new uses for Hospitality's locomotive) as well as a work print of a 40 minute alternate edit of OH, which strips out all the gags and was apparently put together by Keaton to see if the story worked without them. But the real reason you need to get this is the symphonic score -- in 5.1. Surround -- by Carl Davis, originally written for the Thames Silents British tv series in 1984. Davis pretty much cornered the market on composing great new music for 20s films in the 80s and early 90s, but many of those scores, which were available on VHS or laserdisc versions of the films (including Our Hospitality), have long been of print; kudos to Kino, in other words, for bringing this one back into wide circulation. [Now will somebody please reissue the version of Victor Seastrom's great The Wind with the Davis score that MGM/UA had on tape and has never been on DVD or Blu-ray? Thank you.]

Bottom line: This one's not to be missed; get thee over to Amazon here and order a copy now.

And with that out of the way, and given that things will most likely be a little serene around here until Monday, here's a fun and obviously relevant little project to will away the idle hours:

Best or Worst Period Comedy, i.e. One Set in an Era Not Its Own!!!

One of the greatest films ever made; it's like a Matthew Brady photo come to life with gags.

A semi-remake of the above, and often painfully unfunny. Keaton (uncredited) was brought in to stage some of the big scenes, but it really didn't help.

An attempted pastiche of A Tale of Two Cities and The Corsican Brothers, and despite a good cast, pretty much of a misfire. That business/pleasure scene in the clip is actually the funniest thing in the movie, which isn't saying much.

Screamingly funny, obviously, but the period detail is dead on as well. Trust me -- I was there, and if there's an anachronism on view here I haven't noticed it yet.

And the Numero Uno not-so-hot cinematic evocation of a vanished era that probably never was clearly is....

Woody's take on one of those old 1940s private eye comedy-mysteries. The thing looks authentic, and the gags are often funny, but mostly it doesn't work, and mostly because the then 66 year old star comes off as creepy trying to get into Helen Hunt's pants.

Alrighty then -- what would your choices be?
Posted by steve simels at 8:39 AM

Dazed and Confused
Sleeper
Young Frankenstein
Blazing Saddles
M*A*S*H
Yojimbo (well, Kurosawa said it was a comedy. It is pretty funny in parts)

Oh yes, wanted to add:
Curse of the Jade Scorpion is so incredibly bad if I were teaching a film class I would use it as an example of what happens when everything in the movie is wrong.

I watched it with a group of six, sober, people and I was literally the only one still awake and the end. I only survived because I wanted to see if it could get any worse.

Yes, Jade Scorpion - that was exactly the thing that infiltrated my enjoyment of it, like a dead key on an otherwise lovely piano.
I suggest Harold Lloyd's The Kid Brother. That seemed to be set in the 1890s or so. The gags aren't elaborate, but it has a brisk pace, with none of the longueurs that you find in some of the movies of the time.

Harold Lloyd and Buster Keaton slay me. I am happy so many of us enjoy their work.

- W.C. Fields' The Old Fashioned Way
- Keaton's The Three Ages of Man
- Caveman with Ringo!
- Blazing Saddles (anachronisms are usually a lazy way to get laughs but they work so well in this one)
- Sleeper (which STILL looks good on a very modest budget)
- My Little Chickadee
- One of the best film comedies ever, Way Out West with Laurel and Hardy

And since Mel Brooks gets one of the best, he also has to get cited for one of the worst: Spaceballs, a parody that was 10 years too late and without a single funny gag in its limp tired running time

May I second the vote for My Little Chickadee and Way Out West? Especially the latter, which is sublime.

"Animal House" has the scene with the 70's era Elvis poster on the rusewall.

I must confess I never spotted that.

Monty Python and the Holy Grail

A Funny Thing Happened On The Way To The Forum (with Buster!) ... okay, it was originally a Broadway musical ...

May the Schwartz be with you. Now come on, that was funny!

"Roman Scandals" with Eddie Cantor. Okay, the part where he goes back to ancient Rome is a dream, but the dance sequences are directed by Busby Berkeley, and the song, "Keep Young and Beautiful" is bouncy as heck. Yeah, Cantor sings it in blackface, but toward the end of the song, an African woman in Roman garb attempts scald him to death with steam, but manages only to shrink him into a blackface midget. Agest, sexist, lookist, racist -- tasteless: it's Eddie Cantor.

I remember reading that Keaton was such a stickler for detail he scouted for ages until he found a location with the proper period track gauge.

I've always LOVED "Start the Revolution..." BTW, I've also always thought that DeNiro was imitating a scene with Wilder in that movie when he did his "You talking to me?" bit in "Taxi Driver".

As for "Spaceballs", it is INCREDIBLY horrendous (and unable to top the great "Hardware Wars," which was made for $1.95). But Rick Moranis is great - if you just edited together his sequences, you'd have a pretty funny ten minutes or so...

Velvet Goldmine (1998)_Works not all of the time, but some of the time.

This Is England (2006)_I kept forgetting the movie was actually new.

American Graffiti. Like Animal House, the gap between the setting of the movie and time of release, wasn't great, but they might as well have been 50 years or more apart. AG is the only film that Lucas directed that I love.

Gotta agree with the people who like "Start the Revolution". I re-watched it recently and thought it was amusing enough -- keeping in mind that it was produced in the penumbra of much better Richard Lester-directed costume product.

I haven't seen Start The Revolution in about 30 years, but the phrase "Later that night, 1789..." has been useful to me on many occasions;>

And speaking of Richard Lester, his Three and Four Musketeers were wonderful comedies surprisingly loyal to the source material..

I have a fairly large film library, and I just looked over the comedies. I hadn't thought about it before, but most of the comedies are set in the period they were made.

Aside from the Mel Brooks entries like Silent Movie or Blazing Saddles (more spoofs of genre rather than about a period of time) the ones I like best that could be called period pieces are centered around nostalgia for the author's/director's youth.

My Favorite Year is an obvious example of this kind of comedy, evoking the loopiness of live television from the Fifties. Peter O'Toole's performance as the aging film legend suffering from too much booze and loose living is, well, autobiographical in its hilarity.

Woody Allen's Radio Days remains one of his best period pieces--one that I can share with folks that hate his face, because his face is not in it. It's also, I think, when he peaked, and though he keeps cranking out films, afterward they've been more miss than hit.

Speaking of childhood nostalgic paeans, the original John Waters' Hairspray is one of the best. It's all about a slice of time in Waters' Baltimore youth, and his love for that time gives the film a warmth beyond the ironic overdose his other work usually induces.

Though not quite fitting into the topic, I'll include the 1958 Auntie Mame. The climax is set in the time the film was made, but it starts in the late Twenties and works its way up. Why include it? Because it's my all-time favorite comedy...because Rosalind Russell is brilliant...so there.

After saying all that, staring me right in the face is one of the best "historical" comedies:

"So funny it was banned in Norway!"