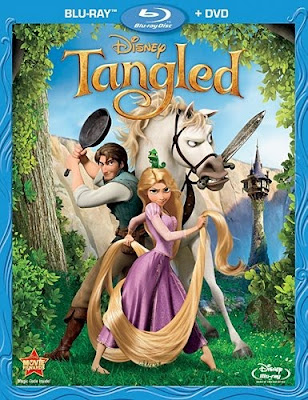 Video Even of the Week: Might Rogue Pictures' DVD of Skyline -- the aliens invading California sci-fi that makes Battle L.A. look like The Hurt Locker -- be what we're talking about? Is Warner Home Video's Blu-ray of Yogi Bear, with Dan Aykroyd as the voice of the computer-animated incarnation of the Hanna-Barbera cartoon character, conceivably in the running? Or against all the odds, are Sony's various disc versions of The Tourist, the Hitchockian romantic thriller with the dream team of Johnny Depp and Angelina Jolie, perhaps The One(s)?

All worthy to be sure, especially that last (and I seem to be the only person alive who enjoyed it unreservedly) but for my money -- and granted, it's a slow week -- it's got to be Disney's Blu-ray/DVD combo pack of the animated musical hit Tangled.

Tangled, of course, is a teen version of the venerable Rapunzel story, with Mandy Moore -- the Miley Cyrus of an earlier generation -- providing the voice of the heroine (and with a lot of spunk, although as Lou Grant famously told Mary Richards, I hate spunk). Songs -- and there are a lot of them -- are by Alan Menken, a very talented guy who has yet to equal the ones he wrote for Little Shop of Horrors back in 1982, but the real reason to see this is the animation. The creative team here -- including Pixar genius John Lasseter, who co-produced -- use CGI to simulate the look of traditional hand-drawn Disney fare (more specifically, given the story's Grimm's fairy tale origins, old oil paintings and kids book illustrations) and the results are mostly breathtaking (think the ballroom sequence in Beauty and the Beast). At what point the Oh Wow! novelty wears thin, however, will depend on your attention span

Here's the trailer, which should give you at least an idea of the film's visual splendor.

It will come as no surprise to anybody that Tangled looks quite stunning in both the DVD and Blu-ray high-def transfers here (I want to say that the Blu-ray looks incrementally better, but frankly I can't see much difference); bonuses with the combo pack include the de rigeur deleted scenes and making-of documentary, which are interesting up to a point, if you catch my meaning.

In any case, the film is a stunning (if rather pro forma) achievement; you can -- and on balance probably should -- order it over at Amazon here.

And with that out of the way, here's a fun and clearly relevant little project to help us wile away the hours till next we meet:

The one and only. With the divine Josette day and Jean Marais, whose fatuous good looks were never better employed.

Cinderella as an L.A. street hooker. I still can't believe anybody actually likes this reprehensible piece of crap.

Cinderella again, only this time embodied by Jerry Lewis. I think this is actually one of his best, although a lot of that is down to writer/director Tashlin.

And the Numero Uno happy-ever-after flick of them all simply has to be...

Said it before and I'll say it again -- Rocky's II through V are all completely awful, but the first one is an utterly charming fairy tale cleverly concealed inside a seeming piece of slice-of-life blue collar realism.

Alrighty, then -- what would your choices be?
Posted by steve simels at 8:42 AM

Hmmm, tough catagory. As you've included Rocky and Pretty Woman (with you on the awfulness of that) you've migrated out of the range of direct intervention of magical creatures, so it is hard to tell what really constitutes a fairy tale.

If we eliminate all of the Disney fare, we're left with mostly dreck. The first two Shrek's were ok.

Carol Kane's fairy godmother in Scrooged is a hoot.

I hated ET, the much better Time Bandits came out about the same time. Brazil and The Adventures of Baron von Munchausen probably can be considered adult fairy tales.

Oh well, that's all for now.

Oh Brother Where Art Thou? I guess The Odyssey isn't really a fairy tale, but I loved the movie.

Agree with edward on the first two Shreks.

The last Rocky is also good. Wraps up the series nicely.

I'd say Edward Scissorhands, as it seems oft-maligned or overlooked, for some odd reason.

Being that the Cocteau film is already listed, and as you've opened the door to non-standard fare, I'll choose:

Ghost -- I may be alone in this, but I love it, though I expected I would hate it. For me, it's Whoopi's finest and funniest screen role. Some favorite scenes are the ones inside the bank and just after (with the nuns), and the sweetly funny bit at the seance, where the woman replies to her (dead) husband's inquiry about her hair ("It's called Autumn Sunset! You like it?")

I really liked the version of "Bluebeard," directed by Catherine Breillat, that came out a couple years back.

I couldn't agree more on "Pretty Woman" ... I've always thought it was crap.

And I'm with Jeff M on "Ghost" ... although it probably would have been insufferable without Whoopi.

I think "Working Girl" is a classic fairy tale, and I get hooked every time it's on.

"Tangled" was absolutely first rate, with a tight script, wonderful imagery, great textures and animation, and drawing that was reminiscent of the whole line of Disney characters, going right back to the beginning.

I second Edward Scissorhands. I loved every second of that movie.

Obviously The Princess Bride, one of exactly two good movies that Rob Reiner directed (the other being, of course, This Is Spinal Tap). Although I've heard that The Sure Thing is good too. Back to The Princess Bride, the scenes between Peter Falk and Fred Savage are pure magic.

And in the same fairy-tale-inside-realism sandwich, I'd nominate Terry Gilliam's The Fisher King - the last good movie performance of Robin Williams, Jeff Bridges is great, and Mercedes Ruehl is brilliant and gorgeous.

"The Sure Thing" is wonderful. It's a college kid version of "It Happened One Night." Only better.

"Babe." One of the few movies I can think of that five-year-olds and fifty-year-olds like for the same reasons.