[In the light of certain recent events in Asia, not to mention the Obama administration's appalling and frankly near unbelievable response to them -- asking congress for billions in guarantees for future nuke plant construction -- I thought re-posting this angry and admittedly self-indulgent rant from last year would not be inappropriate. --S.S.]

Okay, apologies up front: I'm acutely aware that the title of the blog you're reading at the moment is PowerPop, not Pissed Off Leftie.

But every now and then, something just sticks in my craw.

Over the summer, I wrote a tough column [about President Obama]...That week, I ran into Rahm at a Bruce Springsteen concert.

Isn't that sweet? Republican David Brooks, enthusiast for nuclear power, and Democrat Rahm Emmanuel, a nuke industry consultant who's probably responsible for the Obama administration's (IMHO) criminally stupid, short-sighted and dangerous enthusiasm for nuclear power, together at a Springsteen show.

Gee, I wonder if Bruce did this song -- written in response to the disaster at Three Mile Island -- the night those two cynical shitheads held hands. 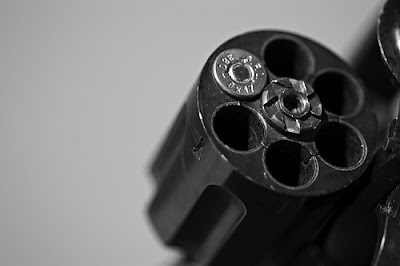 Nah. Probably not.
Posted by steve simels at 8:46 AM

As another pissed off leftie and a Springsteen fanatic, I'll just say "Amen" to this one. I'm just proud to say that I never trusted or supported Obama for a second and never will. Bait and switch.

As a friend said, I expected to be disappointed with the Virtual Republican in the White House. I did not, however, expect to be appalled.

You have a wise friend, Steve. Very well put.

Incidentally, I don't remember where I got that gun photo up top, but I suddenly have the urge to write a hard-boiled detective novel and use that one the book cover.

the sooner you realize that these guys in DC are all friends (despite their right or left leanings) the more this will make sense. The ideology is a sideshow that keeps the masses stirred up as they yuk it up backstage with the Boss.

Not sure if a storming of DC with pitchforks, guns 'n ammo will happen in my lifetime but it might.

it's amazing how ill-informed most people are about all of this...I know plenty of pissed off lefties who are solidly behind nuclear power.

Be scared, be very, very scared.

I never trusted Obama. He was like a dorky kid suddenly invited to the popular kids' party. He tries to hard to make everyone happy, which is not what the cool kids do.
Rahm Emmanuel has issues. You can tell because he curses so much. He is a grown man, for heavens' sake.
How come all these shitheads get great seats at Springsteen concerts?