But before we get to the gals in question, the following paragraphs -- from a review in the New York Times, of a book by a scientist researching creativity, specifically musical talent -- grabbed my attention on Thursday, for obvious reasons.

At 13, an age when most boys want to learn the guitar, Gary Marcus, decided he wanted to be a scientist. Twenty-five years later he had become one of the country’s best known cognitive psychologists, with major papers and three general-interest books on the workings of the human mind and a position running New York University’s Center for Language and Music.

And he wanted to play the guitar.

For any adult learning an instrument or a new language is terrifying. For a cognitive scientist, it can also be downright depressing. Humans have an early childhood window to acquire such skills easily, according to a long-held tenet in his profession, and it’s a window that closes quickly. Then there is the issue of innate ability. While no single gene can explain Beethoven, Yo-Yo Ma or “Waterloo Sunset,” Dr. Marcus does believe in natural talent, he said, or at least in the certainty he doesn’t have any.

Heh. It appears somebody at the Times may have read my earlier scribblings about the sublimity of a certain Kinks song.

Moving along, however, we're supposed to be talking about the ever popular subject of Dames in Rock. In that regard, today we consider -- Goldie and the Gingerbreads.

Who, if not as claimed (usually by them) history's very first all girl self-contained rock band (i.e., who played their own instruments), were unquestionably the first such outfit to score a hit single in England, hang out with the likes of The Rolling Stones, and tour with all sorts of other big deal Brit invasion types.

GATGs, of course, were fronted by Genya Ravan, who (as lead singer of a not completely horrible post Blood Sweat and Tears horn band called Ten Wheel Drive) was much beloved of legendary WNEW-FM disc jockey Allison Steele, and who later, in the CBGBs era, produced the classic first album by The Dead Boys and ran one of the first indie New Wave record labels.

Anyway, I had never actually heard any music by Goldie and the Gingerbreads, so recently, when somebody I know who had worked with Ravan back in the day happened to mention her to me in passing, I finally did a little Googling, and sure enough -- there was a live (lip-synched) clip of the band on YouTube. Turns out it was their UK top 40 hit "Can't You Hear My Heartbeat," a version of the same pleasant bubble-gum soul song that was later a much bigger record in the US for Herman's Hermits. That's Ravan on the right with the tambourine, obviously.

I also found this blurb, which sort of speaks for itself.

Goldie and the Gingerbreads' first engagement was at New York City's notorious Peppermint Lounge, During a stint at the Wagon Wheel on 45th Street, Eric Burdon, The Animals, and their manager, Mike Jeffries, dropped in after having been lured by the music they heard coming from the club, "There was so much feeling in Goldie's voice that I was stunned to find such a "black" sound could be produced by a group of white girls," said Eric Burdon. Alan Price, the Animals keyboard player who would go on to produce "Can't you Hear My Heartbeat?" for the girls in 1965, agreed: "When I heard Margo play the organ, I felt like going out and getting drunk." 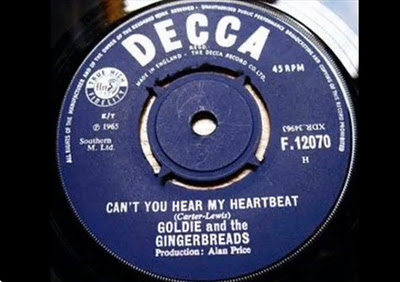 Heh. It's a cute record, to be sure, and maybe GATGs sounded tougher in person than they did in the studio, but on the aural evidence I'd say producer Price might have been drunk BEFORE he heard them. In any case, there's a part of me that thinks he made the record as a way to, for want of a better phrase, get to know them better.

If so, I can only add (and boy, do I wish a could insert a smiley-face emoticon here) -- poor bastard.
Posted by steve simels at 12:12 AM

Genya Raven hosts a couple of pretty decent shows on Sirius/XM's Underground Garage channel, but I confess I haven't been too impressed by her recorded oeuvre.

Painful to watch and listen to, just dreadful.

Not a good way to start the week.

Let see some Lucinda by Friday

I liked it (but I have a soft spot for girl groups, so I'm willing to forgive almost anything.)

Bring on the rest of the week! (One can only hope "Fanny" and the Pleasure Seekers make an appearance...)

Yeah, the organ player is playing the bass line.

If you close your eyes it sounds convincingly like a B-side reject from a Motown girl group whose album was never released. If that's what Alan Price was going for, he nailed it.

My only request is can we skip the Shaggs this week? In spite of Frank Zappa's endorsement, I believe them to be unlistenable. A great way to clear the room.

Check out "Think About The Good Times" by Goldie & G-Breads.

While producing a band I was in,Genya,if she felt the session was losing energy,would flash us.It never failed to perk us right up !
GB

Hard to believe that's the same woman who did the incredible duet with Ian Hunter, "Junkman."