You know, to be honest, I was never particularly impressed with Suzi Quatro back in her early 70s glam-rock stardom period. Although in retrospect a lot of her records -- which were hits pretty much everywhere in the civilized world except the USA -- were actually pretty good, as our pal and colleague Kid Charlemagne has testified here over the years.

To me, though -- and I say this despite the fact that my early 70s girlfriend was a refugee from the Detroit rock scene and had lots of stories about Suzi and the rest of her Motor City colleagues -- the only reason I ever particularly took notice was because a) her name actually was Suzi Q (c'mon -- how cool is that?) b) she played Leather Tuscadero, the sister of Fonzie's girlfriend Pinky, on Happy Days and c) there was a credible rumor going around that she (Suzi) and Rick Derringer were in fact the same person.

Seriously -- did YOU ever see the two of them in the same room at the same time?

In any case, I knew that Suzi -- and pretty much the rest of her immediate family -- had been in an all-girl 60s Detroit garage band called The Pleasure Seekers in those pre-stardom days... 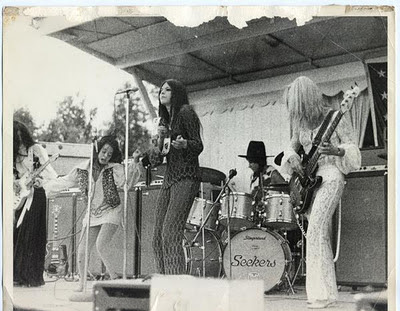 ...but what I am embarrassed to admit I didn't know until last week is that the Pleasure Seekers had released a 45 in 1966 that may in fact be the single most astounding piece of garage rock ever waxed.

Ladies and germs -- behold in breathless wonder "What a Way to Die." 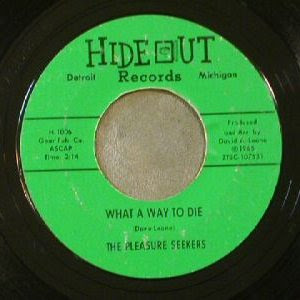 In case you can't quite make out the lyrics through the low-fi mono murk, Suzi is sending the following tender blandishments toward a potential lover (and Iggy, eat your heart out).

Well I love you baby
I’m telling you right here
But please don’t make me decide baby
Between you and a bottle of beer.

Baby come on over,
Come on over to my side
Well I may not live past twenty-one
but WOO!
What a way to die!

Baby come on over,
Come on over to my side
Well I may not live past twenty-one
but WOO!
What a way to die

Yes, obviously, the song and the record are kind of a joke. As anybody who ever went to a high school dance back then knows, the Pleasure Seekers probably didn't really want to die before they got old, i,e, before they got laid a lot.

But still...that kind of gonzo nihilism, even if it was a pose they barely understood, was not only unprecedented for a bunch of suburban adolescent gals, but also, clearly, a huge influence in all sorts of unexpected ways on the rest of rock history.

Speaking of which, I think we need to research whether the song's lyrical mention of Strohs, Schlitz and Colt 45 was some kind of innovative product placement or just alcoholic bravado.
Posted by steve simels at 9:20 AM

Wow, that's awful -- and I mean that in the best possible way.

Add some bar-chorded buzzsaw guitar and this song would fit in perfectly with the class of '76....

I never got Suzi Quatro either -- and I've tried considering I hail from the greater Detroit area.

Her autobiography was a fairly interesting read, though.

Oh, and I heard her most recent solo album. That was surprisingly good. But the 70's big ass hit British singles? Never did anything for me (and still don't...)

Wow, this is amazing, great guitar riff too! I like the way her voice is totally shot. This more than makes up for her appearances on Happy Days.

Thanks for including the lyrics, otherwise I wouldn't have made it all the way through or caught all the nuance.

I am with Shriner, I kind of like her recent solo release.

That is a future Nuggets tune for sure! I did not know she had that in her. Knowing it was in her, I wish she had let it out more.

Great find. I only recently revisited the "classic" 70s output, thanks to a Mojo (or was it Uncut) article. I still think it's super weak. But this track? Wow!

I think the problem with most "glam" is that it's either great...The Sweet...or horrible...Showaddywaddy. (and sorry, Suzi Q.)

I was an outcast in High School; while everyone else was listening to Led Zep I was digging T Rex, Gary Glitter, The Sweet--and Suzi Quatro. There used to be a Brit TV show that got syndicated in the US called "Supersonic". It was on Ch 13 in Baltimore very late on Saturday nights. It had all the big glitter acts. Suzi was a leather girl mostly (though there are some photos of her in Glitter pant suits from those days) but musically she got lumped in with the Glitter Acts. Probably because she was on RAK in the UK (Mickey Most's label in the '70's). "The Wild One" and "Devil Gate Drive" still sound pretty good to me, and more importantly she (along with McCartney and The Yardbirds Paul Samwell-Smith) was one of the people who inspired me to take up the bass guitar. I understand she had a show on BBC Radio at one point; not sure if she's still doing that though. She has a nice web site and still does pretty well with live gigs, though she hasn't had a hit in a long time.

Are you comin' or not, baby?

This is such a hoot, and also good. Who wrote this? And how did this not get converted to a C & W hit in the 70s?

this was written by Dave Leone, co-owner (with Punch Andrews) of Hide-Out Records. Talk about putting your words into someone's mouth....

"Yes, obviously, the song and the record are kind of a joke..."

I beg to differ! These ladies were raunch city from the crib! If you ever stumble across Ugly Things #13, read the interview with Suzi's sister Patti. Don't have it on my or else I'd be a quotin' machine.