Great Minds Think Alike. What Explains the Following, However, Remains a Mystery.

Long-time or attentive readers are no doubt aware that I've been an on again/off again member (currently on again) of a recording/performance rock-and-roll collective/band called The Weasels since the early 70s.

Here, to refresh your memory, is the cover of our very first recorded project (circa '73 or '74), entitled The White Album, for reasons way to embarrassing to get into. 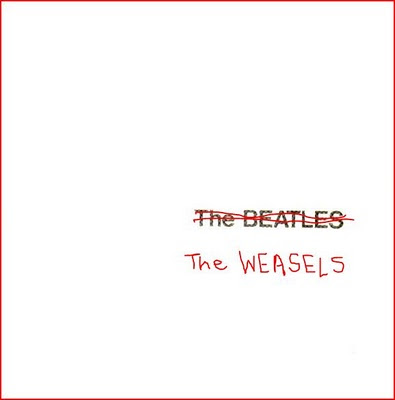 Anyway, like I said, we've been at it for quite some time now, so imagine our surprise a few weeks ago when we learned, accidentally via the intertubes, that there was another recording/performance rock-and-roll collective/band called The Weasels, who've been active around Albany, New York since the mid-'80s.

We reacted to this news, as you might expect, with the maturity and grace that has always been our hallmark, i.e. we looked at each other and said "Hey, we're gonna sue those bastards so fast their heads will spin."

Fortunately, when we took a moment to actually check out their work, we noticed that the theoretically faux Weasels were actually really smart and really funny. So we've -- or in this case, more accurately I've -- decided to forego the lawsuit and just give 'em a little free publicity and a tip of the Hatlo Hat instead.

Some history, from their Wiki article:

Inspired by the response to their Ear Jam performance, the expanded band polished their basement tapes and released Meat the Weasels: Volume 1, Fondue Cabaret in 1993. In addition to [members] Doctor Fun, Roy Weasell and Chris Graf, this record featured Jonathan Cohen (bass guitar and slide whistle, sometimes billed as Jonny Weasel), Rocky Petrocelli (drums) and David Maynard (guitar). Maynard had once been a member of the New York Rubber Rock Band, whose 1975 single "Disco Lucy" was named "Worst Single of the Year" by Billboard Magazine.

The Weasels continued to perform live in support of their early material, though with continued instability in the drummer’s seat, which was occupied at various times in their early years by Petrocelli, Jordan Cohen (later of Powerman 5000 and Blue Man Group), Dave King, Doug Klein, Dan Roberts, Steve Scoons, Dave Berger and Steve Candlen, with the latter two emerging as drummers of choice for their middle recording period. The album’s opening cut, “Let the Killing Begin,” is the first in a series of Weasels songs about notorious killers, in this case Henry Lee Lucas. It incorporates a tongue-in-cheek adaptation of the soliloquy from the Doors’ “The End”.

I should add that some of these guys' song titles are particularly droll. My favorites, at the moment, include "Klaus Barbie and Ken," "Paging Larry Storch" (a heartfelt tribute to the F-Troop star, and apparently part of a Larry Trilogy), "Officer Gerbils" and "Bitch is All Business," described at the official website as "an ode to feminism." I am also fond of an album of theirs entitled Uranus or Bust.

Here's the cover to their latest masterwork, the trenchantly monikered Axis of Weasel... 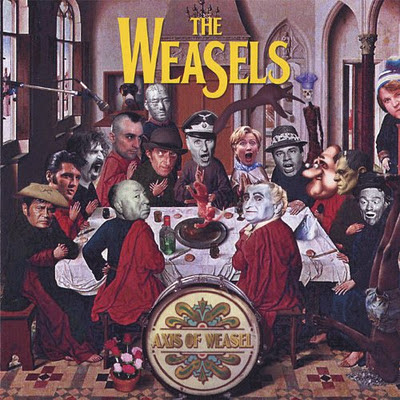 ...which the band informs us "was released in the sense that the CDs were manufactured and we have several hundred copies out in the garage if anyone wants one."

And here's a video, for the recent "Do the Teabag." A title that has a certain relevance to last Tuesday's rant, for what it's worth.

So, in conclusion -- get over to The Weasels website and give 'em some love.

And tell 'em The Weasels sent you, obviously.
Posted by steve simels at 12:06 AM

So what are the chances that those Weasels would have an album titled "Generation Excrement", and we (hereafter referred to as "The Savage Young Weasels") would have one titled "Mondo Feculando"? As you said, "great minds think alike."

Hey look! my cover art on someone's blog! I feel like Phineas Gage, or some other person that became famous due to a head injury...

You take the accolades where you can get 'em, my friend.
:-)

Sounds like something Frank Zappa and The Mothers would do. Pretty cool.

You had me at Larry Storch.

Points off for the colorized Stooges in the video.

I worked with a guy whose daughter's name was Barbie Klause.

Larry Storch got me too.