It Came From the Vaults (An Occasional Series)

Okay kids, prepare to have your tiny minds blown. And this is not hyperbole.

From 1981 and a frighteningly brief demo session at CBS studios in New York City, please enjoy genuine underground power pop legend David Grahame and the remarkable on countless levels gem that is "If You Think You Need Me." 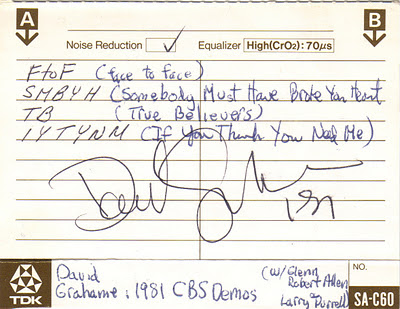 A little biographical data: David was one of the original McCartneys in the first Broadway production of Beatlemania (Marshall Crenshaw was one of the Lennons); a few years later he was a member of The Mix, a Small Faces-ish combo who made one great under-distributed album which should have been huge. In 1991, he co-wrote the infernal Mr. Big hit "To Be With You," which has presumably been paying his rent ever since.

"If You Think You Need Me" itself is, in my humble opinion, one of the most flawless Brit Invasion/power pop/Beatles/Hollies/Big Star/Shoes/Rundgren-inspired concoctions every heard by sentient mammalian ears, for a number of reasons beyond the obvious hookiness and cool guitars. For starters, you'll note that it has two (count 'em -- two!) different bridge sections, which is structurally brilliant (and when the second one comes in, at approximately the 1:40 second mark, the effect is almost chemical.) For another thing, the first verse lyric "Simple words cannot express/my delight when you undress" just might be the funniest and most profound line in the history of Western Literature, let alone pop music.

Credit where credit is due: David is singing and playing everything on the track save for almost inaudible rhythm guitar (by me) and the fabulous drums (my old chum Glen "Bob" Allen.)

I should also add that the CBS A&R guy who authorized the session was the late Paul Atkinson, guitarist for The Zombies. In fact, while we were working on the song he showed up briefly at the studio (tennis racket in hand, on the way to a weekend in the Hamptons) and I will not mince words -- I almost lost it, in a fanboy "I'm not worthy" sense. Meeting him was actually one of the great thrills of my adult life.
Posted by steve simels at 9:58 AM

(and when the second one comes in, at approximately the 1:40 second mark, the effect is almost chemical.)

Damn! You nailed it. Chills.

Very nice and catchy crafted song. A little busy though. Like putting 10 pounds into a 5 pound bag. Could've been a minute or so shorter, maybe by cutting the lead break and still including the 2 nice bridges. I guess that's the producer in me talking.

I don't disagree about the length -- in fact, I thought it could have been cut at the time we were recording it -- but it's so damned catchy and propulsive I pretty much don't mind that it goes on a tad too long.

Can we have a little more info on your production credit? You just kinda sneak that in there...

I was just a session guy on this; David produced it.

The CBS staff engineer who recorded this, and whose name I can't remember, had done sessions on some of the classic albums by Sly and the Family Stone and Moby Grape, which also intimidated/thrilled me.

made me want to dance around the room but i've got work to finish and was afraid if i started i wouldn't stop!

...one of the most flawless Brit Invasion/power pop/Beatles/Hollies/Big Star/Shoes/Rundgren-inspired concoctions every heard by sentient mammalian ears...

Listening to David Grahame's stuff from this period is like absorbing the history of white pop, 1963 - 1970.

It's a little peppier than most Badfinger, but yeah...
:-)

One of his better tunes to be sure. But Grahame was always more Emitt Rhodes than McCartney IMHO--not that there's anything wrong with that. I still remember how uneasy he felt about the line, "Simple words cannot express my delight when you undress." But he seemed to relax about it when I assured him it was the best line in the song. He was a monster (in more ways than one) in those days.

Hate to bug y'all with an IT question, but any idea why the divshare widgets have stopped showing up for me? I tried both Firefox and IE and no luck.

Thanks for any help you can give.

(And I'm curious...did you get "clearance" to post that?)

Well, as long as most of the posts here are flattering, I think you'll be safe.

Then again, it might depend how steady those royalties are still rolling in... ;-)

Steve - Another great David Grahame song. Can you post the other songs from the session?

Well, as long as you asked.

Kinda like Brian Wilson doing powerpop. Not the instruments, but the structure and sheer number of ideas in the song and arrangement.

This is an easy one for me: the string of superb title songs written by Burt Bacharach and Hal David haven't been surpassed in the rock era, even if the songs aren't rock. These include two of their masterpieces with Dionne Warwick, "Alfie" and "A House Is Not a Home."
But then there's also "The Man Who Shot Liberty Valance,"and a gem that never made the film, "Fool Killer," with a scary vocal by Gene Pitney, who come to think of it, resembled the star of the movie, Tony Perkins: http://www.youtube.com/watch?v=wvM3wiKxpEc.

I'm here to praise Hal David, who manages to encapsulate each movie in a couple of minutes, even finding the emotional core in movies that couldn't find their own (AHINAH, most notably). Has there been a more elegant lyricist in the last 60 years? I think not.