Okay, It Turns Out Sonny Bono Wrote More Than One Great Song....

The other one is "Needles and Pins," obviously.

In any event, this seems to be turning in to Terry Reid week, so here's Reid's quite brilliant 1968 cover of the ahead of its time (Gogol Bordello would have killed to have written it) Cher ironic gypsy/punk single "Bang Bang." 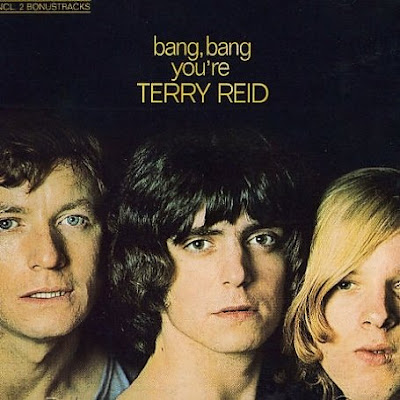 Food for thought: Reid was offered the frontman gig in Led Zeppelin and turned it down, thus altering history in unfathomable -- and in my opinion, unfortunate -- ways.
Posted by steve simels at 12:00 AM

Mickie Most had Terry believing he would be the next big thing, which from what I've read is why he turned Jimmy Page down. No doubt Led Zep would have been a better band with Terry, at least musically. Of course Most went on to do what he always did, attempt to manipulate the artist until they rebel, which is exactly how Terry reacted, and his subsequent career never took off.

Tough to imagine what Zep would have been like with Terry Reid. Possibly much better musically with much less success.

Since it is Terry Reid week, I went back to the post of October 30, 2007 where you posted the video of a live version of Waterloo Sunset. You had said back then - "PS: If anybody knows anybody who knows anybody connected with the musicians, I would do almost anything within reason to get a high quality copy of the off-the-board audio for this. "
Since I am FB friends with a couple of guys in the band I contacted the drummer Phil Jones and he has now posted on that link.
(http://powerpop.blogspot.com/2007/10/view-from-bridge.html)

Oh - and in trying to track it down, I found a live recording of Bang Bang too.

Oh well, some things are just not meant to be...

Guess what? I just listened to "Bang Bang..."..FOR THE FIRST TIME! I mean, I heard it with half an ear when the CD reissues came out, but I remembered nothing.

Where has this record been my whole life?

I think technically Reid turned down the opportunity to join The Yardbirds. Not wanting to join the retread of a band that never really made it, and had run it's course is a lot different than not joining Led Zeppelin.

my kids just discovered Tarantino movies ans he used Nancy Sinatra's version of the tune in Kill Bill. She does a nice version w/ some tremoloed Billy Strange guitar the icing on the cake.

Bono was a great songwriter: http://www.bogusrecords.com/bono.html