A Few Words in Defense of The Thin White Duke

So our pal Sal Nunziato asked us to contribute a little negativity to a tribute to David Bowie over at Burning Wood/Burning Love yesterday.

It was all mostly tongue in cheek, obviously, except that I really dislike David Bowie (and always have) and Sal doesn't.

In any event, just by way of a postscript, I thought I'd add a little positive stuff about the guy.

4. There's a very nice bootleg from somewhere of a sort of Buddy Holly-ish acoustic and tambourine version of "Hang on to Yourself" that I like unreservedly.

3. He produced Mott the Hoople's "All the Young Dudes."

He also wrote it. Of course, his own version(s) of it sucks, but it's his song and the Mott version is one of the great singles of the 70s..

2. He produced The Stooges Raw Power.

Bowie's mix of the album sucks, of course. But he produced it when nobody else would, and for that alone he deserves respect from mere mortals.

1. Although gay, he married the most drop dead gorgeous woman in the history of the world. 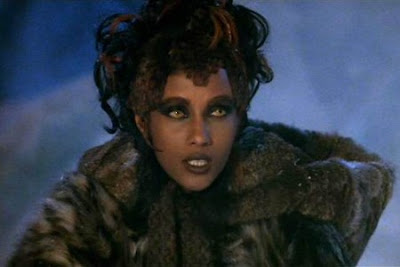 Wait a minute -- that last one actually pisses me off, now that I think of it.

Nicely done. You really have mellowed.

I should add, and I'm not being snarky here, that he's always been a really snazzy dresser.

I'm a Bowie fan and you're not, yet I agreed with almost half of your comments over at Burning Love?
This "Hang On To Yourself" is my favorite version as well. It was originally released as a single by "Arnold Corns"(a nod to "Arnold Layne") in 1971.
Funny that Iggy's remix of "Raw Power" sounds exactly like the original, except compressed and louder.
I think their collaboration on "The Idiot" and "Lust For Life" is even better.
I agree that Bowie's version of "All The Young Dudes sucks with a capital S, so here's a version I recently acquired that may be of interest. It's the Mott version with David and Ian sharing the vocal. Bowie starts it off and for the first time I can understand all the words.
Enjoy!
http://alanwalkerart.com/audio/all_the_young_dudes_david_bowie_ian_hunter_vocals.mp3

"I'm a Bowie fan and you're not, yet I agreed with almost half of your comments over at Burning Love?"

This is exactly why I thought what Steve wrote was so brilliant. I felt exactly the same way.

And Bowie never claimed to be gay, he admitted he was bisexual.

I think their collaboration on "The Idiot" and "Lust For Life" is even better.

Two of the greatest albums of the 70s, I still remember in '77 calling a friend 3,000 miles away, "OMG, have you heard The Idiot!" and he was just as blown away as I was.

Saw that configuration on tour and they had the worst live sound I've ever heard, bar none. I've often wondered if that put a damper on Iggy's big comeback, that new fans went to see him and and all they heard was sludge.

I saw an interview with Bowie about 10 years ago where he admits that he discovered as he got older that he was quite "conventionally heterosexual" or something to that effect. But who cares, really? Not important.

I happen to think that Bowie was one of the most consistent -- and consistently interesting -- artists of the '70s. I still play the lion's share of his '70s albums on a regular basis. Sorry, Steve.

Plus, he'd never be nitpicky enough to point out that your list has 2 number 4s and no number 2! :)

Bowie is a guy I run hot and cold on...sometimes I find him very irritating, but he has done some nice stuff as well. The below is a Live (not lipsynched) clip of The Spiders on Top Of The Pops, a killer version of Jean Genie...

At the end he quotes "Love Me Do" on the harmonica.

To this day, I can't listen to a Bowie song without recalling your scalding 70s reviews. Because of you, Steve, my record collection has no Bowie in it. (Okay, I'll cop to a CD copy of Ziggy Stardust, but I keep it hidden behind the Christmas stuff.) Adopting your views as my own afforded me innumerable opportunities to feel superior to glam-infatuated peers in high school, but I wonder if it wouldn't have been more fun to dress up, hitchhike down to Sunset Blvd. and meet girls.

He wrote the Lust for Life album and gave it to Pop. I think that deserves a mention.