Uh, you may have heard that a certain power pop ensemble from Zion, Illinois has a new album out (their first in 19 years, amazingly).

You may also have wondered why neither Mary or myself has weighed in on it to date.

Well, the answer is that Mary has been toiling on the definitive biography of said band for over two years -- it will be available over here any nanosecond now -- and I was fortunate enough to pen the intro to said tome. And as a result we both feel a little too close to the album and band to be even remotely objective about their latest.

That said, friend of PowerPop Sal Nunziato, proprietor of the inestimable Burning Wood, has kindly consented to let us reprint the review he posted over there earlier this summer. I have a memory of a Creem magazine ad, 1977 maybe, for a record called Black Vinyl Shoes, by a band called Shoes. Usually, my mind traps this kind of trivia. But all I can recollect, aside from the ad, is a rave review by the mag and great disappointment upon hearing the album.

I don't blame the band. I blame myself, my still backward listening habits, and my inability to effectively think about something other than the new Bad Company record.

More records followed, each screaming with mellifluous harmonies and those damned melodies to die for. I am a Shoes fan.

These songs, among others, were hook-filled miracles. Much needed fresh air from MTV's overload during the early part of the 80s.

And now...the boys of Zion, Illinois are back with Ignition. 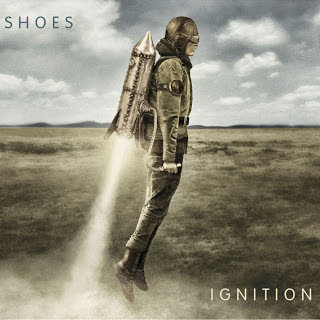 Every song on Ignition offers something...that one special riff, or background vocal hook...that made me say, "This is the one." By the end of the record, I had a dozen favorite songs.

From the opener, "Head Vs. Heart," with the subtle yet always effective bass drop-out on the refrain, a trick that gets me every time, to the call and answer chorus on "Diminishing Returns," to the beautiful melancholy of "Where Will It End," this new entry in a very special Shoes catalogue delivers. It's big, and if you're a fan of perfectly crafted pop tunes, or a sucker for three-part harmony, you will be hard-pressed to take Ignition off.

Brothers Jeff & John Murphy and Gary Klebe have done something few bands have achieved. They've created a sound and they own it. I will go on record by saying, no band sounds like Shoes.

I've gushed enough, but it is that good.

To which I will add that Robert Christgau once famously observed that if you don't like the Rolling Stones, you simply don't like rock-and-roll as a form. Pretty much the same thing can be said about Shoes and Power Pop.

Have I mentioned that this is the album of the year?

"Head Vs Heart" very much resembles "Present tense" and "Boomerang", which I played a lot in the early '80's. I like everything but the drums. I kept anticipating exciting fills that weren't there. Starting with the intro.

I will have to get it. But I must say, that the dB's Falling Off the Sky has apparently been superglued into my car's cd player.

I have found no reason to complain so far.

They are both great albums, TMink.

I should mention that a few weeks back, we went to see Matthew Sweet perform the Girlfriend album, and the Shoes were in attendance. It was almost too painfully cool.

Seriously, kudos to Mary and to the band.

Shoes for the dead, Mister ... DAIN-ger: you just saved me a lot of investigative work! Yes, thanks to Paypal the new album and the new book will both soon be mine. Mine, I tell you, MINE. Both of them! Ha ha!

Being there for the Girlfriend album was a treat I bet!