Come Back, Cream -- All is Forgiven

I first posted the following here back in 2008 (yipes!) but given my mostly tongue-in-cheek diatribe about Cream yesterday, I thought it was appropriate to recycle it.

So...from 1968, please enjoy the aforesaid Cream and their thoroughly atypical pop masterpiece "Anyone for Tennis." 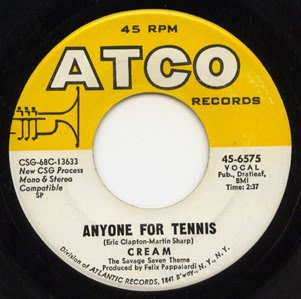 I think this is an all but perfect record and, heretical as it may be, by far Cream's finest accomplishment in the studio.

Those sighing strings (producer Felix Pappalardi on viola), that chiming dive bomb guitar, the lovely mix of bemusement and regret in Clapton's uncharacteristically delicate vocal...and of course, the lyrics.


Twice upon a time in the valley of the tears
The auctioneer is bidding for a box of fading years
And the elephants are dancing on the graves of squealing mice.
Anyone for tennis, wouldn't that be nice?

And the ice creams are all melting on the streets of bloody beer
While the beggars stain the pavements with flourescent Christmas cheer
And the Bentley driving guru is putting up his price.
Anyone for tennis, wouldn't that be nice?

And the prophets in the boutiques give out messages of hope
With jingle bells and fairy tales and blind colliding scopes
And you can tell they're all the same underneath the pretty lies.
Anyone for tennis, wouldn't that be nice?

The yellow Buddhist monk is burning brightly at the zoo
You can bring a bowl of rice and then a glass of water too
And fate is setting up the chessboard while death rolls out the dice.
Anyone for tennis, wouldn't that be nice?

I can't think of a song that so brilliantly evokes the whole post-Summer of Love, what do we do now with the bastards pointing guns at us? vibe of 1968; you can practically hear the Hells Angels revving up their motorcycles for the apocalypse at Altamont to come. Which makes the song's origin -- they wrote it for the soundtrack to a mediocre biker flick -- just that much more ironic.

I should add, by way of a contemporary postscript, that the 45 pictured above was -- along with the Buffalo Springfield's "Bluebird," which came out on ATCO at more or less the same time -- the first non-LP stereo record I ever heard.

Even with the dopey lyrics this is a classic! One of a handful of Cream classic tracks.

This and "Badge" are the only Cream songs I can tolerate.