Songs I Wish I'd Written (or At Least Had a Chance to Play in a Band): An Occasional Series

From 1982, please enjoy one of my top five living Christians who totally rock, the great T-Bone Burnett, and his sardonic ode to a massive lack of self-awareness, the infectious "A Ridiculous Man." 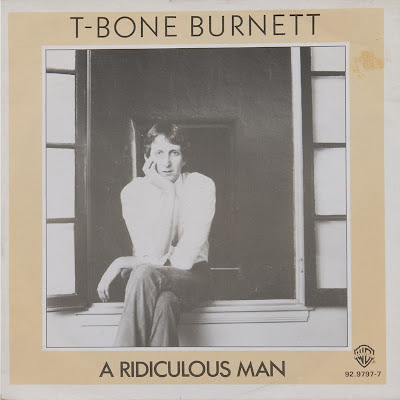 This appeared, with several other splendid tracks -- including the greatest cover of "Diamonds are a Girls Best Friend" ever (eat your heart out, Carol Channing) -- on T-Bone's Trap Door EP, also from 1982; I had no idea it had ever been released as a single.

In any case, a killer tune, hilarious lyrics, great jangly guitars and a monster groove. Damn you, T-Bone, for your pernicious talent!!!

You can find a free download link for Trap Door (or at least you could a year or two ago) at various places on the web if you're of a mind; it's also available (legally) over at Amazon here.

This song, "Stunned" and "Boomerang" are my three T-Bone favorites. He had lost me by the early-90s. I think I liked one song on The Criminal Under My Own Hat. Or was it The Talking Animals? Either way.

Perhaps T Bone should retitle this song "The Ballad of Mike Love"?

T-Bone is one of those guys that give Christians a good name;>

Nice to see a fellow Christian get it right and get some props. T-Bone's production on his wife's record, Sam Phillips' Martinis and Bikinis is simply great! I must recommend it to you all.

Totally! It could be "A Man Called Ridiculous."