Okay, I don't know who photo-shopped this, but it's just wonderfully sweet. And I hope my posting it makes up for the fact that I missed John Lennon's birthday yesterday. 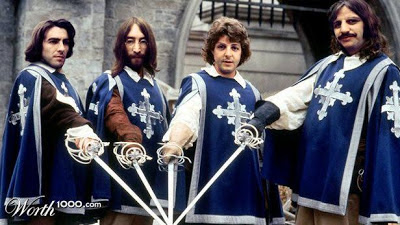 By the way, the funny thing is that, circa 1966-67, the Fabs were actually trying to come up with an idea for a non-musical film project. Given what A Hard Days Night and Help! diretor Richard Lester later did with his Musketeers movies -- two of the best swashbucklers ever made -- it's really too bad nobody thought of this at the time.

"Richard Lester later did with his Musketeers movies -- two of the best swashbucklers ever made.."

And how! Love those films.