And speaking as we were of legendary Bleecker Street rock club Kenny's Castaways, which closed last night after a 45 year run (and where I had, in the 80s, some of the best times of my life, both on and off the stage)...

[and the show was fantastic, and I'll be posting more about it on Wednesday] 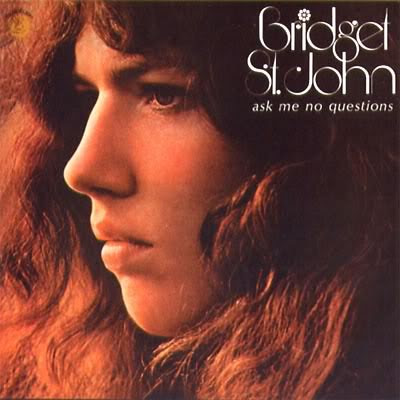 When I was hanging at the club, Bridget was working there almost all the time in some sort of managerial capacity. She was, er, involved, if that is the word, with club owner Pat Kenny, of course, but people were always telling me that she had been a fairly big deal singer/songwriter in England in the 60s, with a couple of albums out. She never performed at the joint, that I saw anyway, but she was (and still is, I'm sure) a very nice lady and, if the album cover above is any indication, had a rather strikingly attractive profile..

Anyway, a few years ago, I was surprised to learn that she'd resumed her musical career and by now become something of a highly regarded cult figure in neo-folkie circles. So last night, for obvious reasons, I downloaded one of her recently reissued albums, specifically the one pictured above (produced in 1969 by legendary DJ John Peel.)

And I gotta admit -- I don't really get the fuss. Maybe you had to be there at the time, but for my taste it all seems rather twee and crumpets.

I know her from the Kevin Ayers album, "Shooting At The Moon".

You just wanted to get that "twee and crumpets" line in, didn't you?

Gummo -- I will admit to being rather insufferably pleased with that line, actually.
:-)

The 34-second intro was about 32 seconds too long. At least my insomnia's been cured.

Never mind its somnambulant quality. There's nothing memorable about it at all. It's more a chant than a hook. My old cantor could've done this just as well.

I can't even begin to imagine this sort of thing spread out over an entire full-length album. It would have to be like a fistful of Ambien, but without the sleep driving, eating and sex.

Kinda sounds like Cassandra Wilson meets Marianne Faithful by way of some boring folk singer. Fair disclosure, I really don't like folk music much. Harsh, but that is what I hear.

A tune on Youtube where she
stretches the word "nice" into 9 syllables...
http://www.youtube.com/watch?v=TgkvZVmpvMY