How the Jews Invented Rock-and-Roll (An Occasional Series)

My pal Steve Schwartz passed the following along.

Simels -- Got this e-mail from a friend earlier today: A short but great, amazing-but-true tale.

So my brother Don played in the house band at the Tamarack Hotel in the Catskills in 1968 and '69.

He always "claimed" that he shared the stage with The Who when their tour came thru the area. I wanted to believe him but I don't think I ever did..... until this weekend when my 84 yr old cousin showed me what was hanging in his garage in Ellenville. 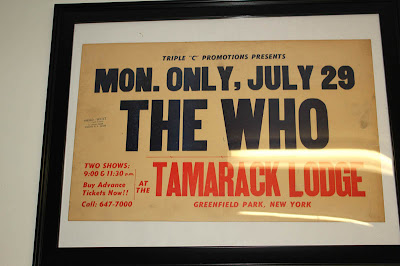 If you ever went to a resort in the Catskills, you pretty much know how bizarre and hilarious this is.

My only hope is that the warm-up act for the show was some guy leading the crowd in a game of Simon Says.

i have no idea what year it was - perhaps '65 or '66 - but my parents hauled us 3 kids around one summer visiting relatives and seeing the Grand Canyon. we stopped in Colorado Springs to meet one set of cousins (the only time we've ever seen them) and i recall repeatedly hearing on the radio a commercial for a Who concert ("They smash their instruments!") at the local VFW Hall. I occasionaly wonder how that went.

They didn't huge till Tommy. Up to that point they were sort of a cool cult band.

Hell, when I saw them in 67, right after Monterey Pop, they were still a teen scream band.

What I wanna see is a picture of the crowd that attended this show...:)

they played my town, Peoria, IL on 3-10- 68. Quite a bit of footage shot when they were in town ended up in "The Kids Are Alright."

A couple of years ago a friend found the concert flyer, signed by all members, at a thrift store.

Solly, come see this music group. The drummer has such shpilkes I think he's gonna plotz!