Wrote about this over at Box Office a few weeks ago, but I thought it behooved repeating. 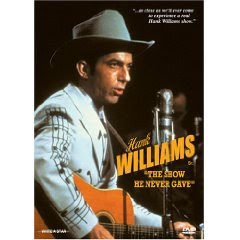 Hank Williams: The Show He Never Gave (1981)
An absolutely amazing film (a made for Canadian TV version of a London stage play), this stars charmingly monikered actor/singer Sneezy Waters as the country music legend right before the end. The premise: On the final night of his life (New Years eve, 1952) Williams (drunk and alone in the back of his long black limousine) imagines himself giving an impromptu two hour performance of his greatest hits in a small back country bar, with his comments to the audience reflecting on his rapidly unravelling life. If you've never seen this, it's hard to convey just how emotionally devastating it is; Waters is utterly convincing as the doomed Hank, and the whole thing really feels like you're watching an actual event via some kind of supernatural time machine. It's a masterpiece, really, and why it isn't better known is beyond me. In any case, you can order it -- and goddamn should, immediately -- HERE.

Seriously -- when I posted that, I hadn't seen the thing in years, but I viewed it (via Netflix) over the weekend and it's as good as I remembered.

Pounce on this one, folks.
Posted by steve simels at 12:30 PM

Loved it. It's as simple as that.

It looks great. And from that picture on the cover, he appears to resemble Michael Richards a little bit in profile.