In Which NYMary Makes an Announcement 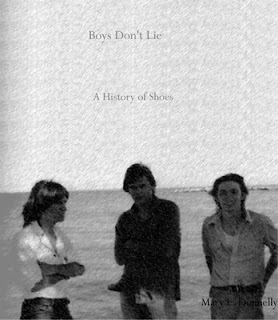 As many of you know, I am currently involved in writing a book, tentatively entitled Boys Don’t Lie: A History of Shoes. The book will attempt to contextualize the story of this band—respected and influential all out of proportion to their modest commercial success—within the context of larger changes in the music industry, including: the crash of ’79, the rise of MTV, the burgeoning independent movement of the mid-to-late 1980’s, the collapse of independent music distribution in the wake of the “alternative” revolution, and the effect of digital technology on small analog production houses.

And so I spent the last week in the Midwest, meeting with the band (and a few other people), going through clippings, scanning and building a digital archive for my own research, but also for them. It was fascinating, enlightening. Sometimes you think you know a story, and it’s not at all, or not only, what you thought. When I began, I didn’t see all the internal and external forces shaping this narrative: even now, I’m not sure I have a handle on everything, but I’m sorting it through.

Right now, my ears roaring from the road and my head spinning with ideas and threads, a completed manuscript seems very far away. Nevertheless, that is my summer project.

Over the next few weeks, I’ll be posting snippets and pics and various things that my research unearths. I don’t expect to do much blogging beyond that, for obvious reasons. But six or seven weeks from now, Boys Don’t Lie should be a 200-plus page narrative tying the dynamics of this fascinating band to the shifting structures in which they have sought to share their music with the rest of us.

Just to keep you posted. All comments welcome, as always.
Posted by NYMary at 11:54 PM

Feh. If you were writing a book about Shirts, or Men Without Hats, maybe you'd have something.

What a great idea (and overdue, too).

I hope you keep us posted on the progress!

I can hardly wait for the book to be done. It will be so cool to follow along with the snippets.

Excellent - so glad I found this blog. Have been a fan since Present Tense came out and recently bought Jeff Murphy's wonderful Cantilever through itunes. Looking forward to your progress on this!