I Also Knew George M. Cohan, But That's a Story For Another Time

Regular readers have unquestionably already gleaned this, but back in the dim dark middle 60s, I was one of those kids who took a gawk at The Beatles on TV and thought -- hey, that looks like fun. What said readers may not know is that unlike the other gazillions of untalented dorks who thought the same thing, I was lucky enough to know a guy whose father ran a major New York recording facility.

The place was called Associated Studios, and it was located on Broadway, across from what's now the Ed Sullivan Theater and next door to what was then called the Metropole, which was the only topless joint in Manhattan at the time. 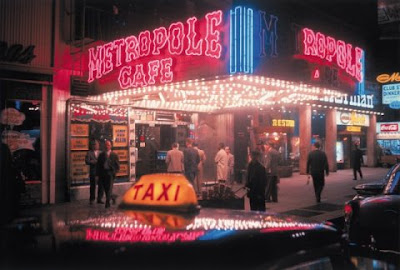 Anyway, because the guitarist in my crappy teenage band's dad owned the joint, we used to go into the studio every couple of weeks and make really bad demos of our own really bad songs, which we got to take home on scratchy, prone to breakage, 45rpm acetate disks. (Have I mentioned that our drummer was Alan Silvestri, now the Oscar-winning composer of the scores to every Robert Zemeckis movie of the last twenty years?)

The guy who used to engineer most of our sessions was a classic New York music biz hustler named Warren Schatz. A schlubby little Jew a few years older than us, he was convinced he was going to be a star someday, and perhaps as a result of that certainty he was also relentlessly trendy; I vividly recall the time he showed up wearing a ridiculous Bob Dylan cap, which we all had a mordant chuckle over. He'd also actually released a bunch of flop singles -- under the preposterous nom du disque Ritchie Dean -- on Tower Records, a Capitol subsidiary (Freddie and the Dreamers and The Standells were technically his labelmates), and we were sort of in awe of him despite everything.

We cut one song with him -- a not as bad as usual Beau Brummels knockoff called "The Loss is Mine" -- that he liked enough to later rewrite the lyrics and demo it himself. Shortly thereafter, our sessions at Associated basically ended as we all went off to college, and I've always wondered whether the song was ever released or what happened to Warren/Ritchie.

Well, thanks to the Google now I know -- turns out he enjoyed some considerable success as a producer and arranger in the Disco Era, although his Wiki entry is pretty skimpy. Where he is now, of course, is anybody's guess.

However, I was absolutely stunned to find this clip of him on YouTube the other day, in which he looks every bit as shlubby as I remembered. At least he's not wearing the cap, thank god.

I'm guessing that song is from 1966, but I have no idea what drive-in rock movie it's in. If anybody can help me on that, I'd be in your debt.

Oh, and I found a discography of the 60s singles released on Tower here. As you can see, although they include the complete ouevre of Ritchie Dean, our song is not among them. Just as well -- my high school bud Alan Weisman, who wrote it, would have been insufferable.

Incidentally, another staff engineer at Associated was the guy who recorded "They're Coming to Take Me Away (Ha-Ha)" as Napoleon XIV. But that's also a story for another time....
Posted by steve simels at 12:05 AM

No clue as to the film, sorry. But boy did women have crunchy hair then!

..and I was shocked to find that "The Loss is Mine" had become a #1 hit in Japan, and with royalties accumulating for 40 years...

Found it, Steve. It's from a sex-ploitation film called "Unholy Matrimony" about wife-swappers, apparently.

As wonderful as YouTube is, Google is even more a wonder:

Hey, btw...looking over that Tower list, I came across a few other interesting labelmates of Dean's:

I don't remember all of those U.K. releases on Tower. I always thought it concentrated on California acts, whether homegrown (Sunrays) or not (Standells). I don't think I ever heard any of those Them singles.

When you see a complete label discography, you always see weirdnesses, and you wonder: What were they thinking (Lon Chaney)? Or what kind of favors were called in (e.g., a Sam Riddle -- KHJ Boss Jock, not known for his singing pipes)?

What was "See Emily Play" doing on Tower?

Go here and you can send Warren a message:
http://www.youtube.com/user/warrenschatz

MJConroy said...
Go here and you can send Warren a message:
http://www.youtube.com/user/warrenschatz