Their Aim Was True

From 1973, please enjoy Brit singer/songwriters slumming as pub rockers The Sutherland Brothers and Quiver and their quite remarkable hit "(I Don't Wanna Love You But) You Got Me Anyway." 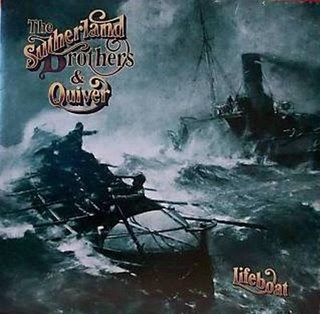 Apart from being a terrific song and an interesting example of the American/Californian influence on a lot of the pub rock that essentially paved the way for the punk and New Wave to come (another one would be "How Long" by Ace) "I Don't Wanna Love You" is notable in that it gave the world its first glimpse of bassist Bruce Thomas, who'd become a rather more angry young man a few years later as a member of Elvis Costello's stellar backup band The Attractions. Interestingly, Thomas was himself six years older than Costello, a generation gap which may or may not have contributed to their estrangement since the late 90s.

In any case, you can download it HERE; as always, if the authorization has expired by the time you get to it, just e-mail me blah blah blah.
Posted by steve simels at 12:01 AM

It's a great song. I have a memory that a noted music critic went nuts over this song, and it was a rare time when I bought an album solely on the basis of one review. Any recall of who the critic was?

Dunno, Dave. Did he have a beret?

The lead guitarist on here was a guy named Peter White, who went on to play with Al Stewart on his big hits. He was a cut above most of the other session types who did this kind of music.

Thanks for putting this out there - this used to get a fair bit of play on my college station back in the day.

Did I rave about this back in the day? I have no memory of that whatsoever, seriously.

BTW, I got this off of the the old Napster back in the day -- it wasn't on CD until very recently. Like in the last six months, actually.

Uh, Steve? Would you?

the hotshit guitarist was tim renwick (really turned loose on the later "Reach for the Sky) who also provided leads for al stewart.

Tim Renwick! That's who I was trying to think of. That's right, Tim Renwick, not Peter White.

I actually found the 1973 Pazz and Jop Poll online at Christgau's site and Ed Ward was the only critic to list SB&Q in the year-end faves (http://www.robertchristgau.com/xg/pnj/pj74.php).

Kind of pleased that Pretzel Logic came in first. Of the top 30, it's the one I listen to most today. I would have thought that Stranded (#21) or Court and Spark (#6) would have done much better.