As you may recall, we had a little discussion around here a while back about whether or not The Lovin' Spoonful's 1965 hit "You Didn't Have to Be So Nice" was power pop or not. I said yes, unsurprisingly, although some disagreed.

In any case, I bring that up because I just made the mistake of downloading all five of John Sebastian's post-Spoonful Reprise albums over at Blank Frank's place. Because I vaguely remembered that there was a song on one of them that I had liked back in the day and that it was sort of power pop-ish as well.

Unfortunately, having now listened to the albums from stem to stern, I have no idea what that song might have been; either I dreamed it, or for whatever reason it's not there anymore. I should also add that -- with the exception of a decent remake of "Didn't Want to Have to Do It" and some sit-com theme whose title escapes me -- most of the stuff on all of those albums is (for me, anyway) now quite unlistenable on all sorts of levels.

That said -- this Spoonful song still just kills me, and I think it's most DEFINITELY proto-power pop. Or, at the very least, 1:55 seconds of sheer guitar-driven melodic bliss. 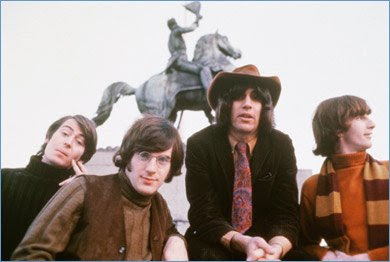 "There She Is," ladies and germs. God, what a great track.
Posted by steve simels at 8:50 AM

I dunno, I always liked Sebastian's first solo album (except for the dirge The Room Nobody Lives In or whatever it's called -- that one has the ability to stop time). Some nice songs otherwise.

divShare downloading not working for me on this track... keeps looping me back to the wait page...

DivShare link should be working. If it isn't, e-mail me and I'll send it to you as an attachment.

divShare no work for me either.

It is disappointing how JS's career petered out. I think I liked "Welcome Back" as much as anything in his post Spoonfuls' career.

I hope everyone realizes that that ISN'T Sebastian singing, or writing either, if I recall correctly.

JBS transitioned away from pop, but he is a true keeper of the jug band music flame (his roots), and everyone should go see his movie, Chasing Gus' Ghost.

Check out in this trailer (it's at 2' 10" after Bob Weir, David Grisman, Geoff Muldaur and Erik Darling are all heard from) how John Sebastian cites Gus Cannon as the wellspring for Younger Girl.

OK, back to Earth now.

The falling-off of Sebastian's solo work certainly gives the lie to all that talk of the Aquarian Age being a new dawn of creativity. But AP's right - the Chasin Gus' Ghost album (there's a film, too?) is one of the great roots/folk albums of all time, featuring Paul Rishell, Annie Raines, Jimmy Vivino, Fritz Richmond, Geoff Muldaur, and the last public appearance of Yank Rachell, quite literally rocking in his wheelchair. It belongs right up there on the shelf with the first Kweskins.

Can't wait to check out Chasin' Gus' Ghost. I heart JS two summers ago doing a one-man show at an outdoor ampitheater. He was pretty darned entertaining, playing all the Spoonful hits on his acustic, and retailing canned anecdotes about the 60s, and dropping Yank Rachell's name as if the old mandolinist was someone anyone had heard of. A friend of mine called it "Branson shtik", but I came away liking the man a lot more.

Pete and Faze, check out the documentary Louie Bluie, about blues mando player Howard Armstrong. Yank Rachell has a lot of screen time. I'm sure Seb would approve.

And i think tarzana Kid was as good as california pop got in the 70s. A bunch of covers but they were well chosen. Sebastion may have petered out as a creative force but the voice held up and he didn't self destruct. Shouldn't that count?