Attack of the Human Sub-Woofer

From 1966, and their eponymous debut album, please enjoy The Move -- featuring the incomparable basso profundo of drummer Bev Bevan [pictured center] -- and his/their sepulchral rendition of the usually jaunty 1934 pop standard "Zing Went the Strings of My Heart." 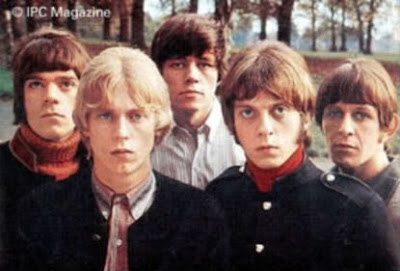 This, of course, is a cover of a cover -- derived from the similarly amusing 1958 r&b version by The Coasters -- and my affection for it is not, apparently, shared by many of my fellow Move afficionados, at least in the rock-critical fraternity. In any case, The Move frequently used that freak voice of Bevan's to good effect -- the hilarious fake country song "Ben Crawley Steel Company" comes to mind -- but I think this is his and their finest moment, on several levels. In fact, it's always struck me as what Rondo Hatton would have sounded like as a pop balladeer
Posted by steve simels at 9:00 AM

Wow, I think I like this better than the Coasters' version. I listened to that more than a few times - I learned early that it was always a good move to flip over Coasters' hits and listen to the B-sides. I ended up listening to "Zing" more than "Yakkety."

I really like their crisp take on "Zing", but this singer is no more a bass vocalist than Mike Love.

I hear some Bobby Pickett in there somewhere.

You're not fooling anyone, Simels! We all know your love of this stems from the bass solo at 1:20.

We all know your love of this stems from the bass solo at 1:20.


It's how Rondo Hatton would have sounded as a bass player (although, I think he's really more of a drummer type).