Well, it's Friday and you know what that means. Yes, my Oriental huge-tracts-of-land developer Fah Lo Suee and I will be heading to scenic Polk County, Wisconsin to host a telethon endeavoring to raise money for a noble public servant on the brink of undeserved financial ruin.

At a town hall meeting in Polk County, Wisconsin earlier this year, Rep. Sean Duffy (R-WI) was asked whether he'd vote to cut his $174,000 annual salary. Duffy sort of hedged, and went on to talk about how $174,000 really isn't that much for his family of seven to live on. Then he went on to say he supports cutting compensation for all public employees, along the lines of what Wisconsin Gov. Scott Walker has proposed for the Badger State

Oh, the humanity -- forced to subsist on $174,000. In any case, Fah Lo Suee and I will be hosting the 48 hour event -- which we're calling Duffy Aid -- and we hope for your support. Pledge whatever dollars you can spare at 1-800-SCHMUCK; operators are standing by.

And with that noted, here's a fun little project to help us wile away the idle hours until regularly scheduled PowerPop activities return:

No arbitrary rules, you're welcome very much, and yes, I'm sure we've done something similar to this before, but I know for a fact that my selections this time out are brand spanking new. So sue me.

And said totally top of my head Top Five selections are:

Apart from the fact that nobody in this band has what could charitably be described as an interesting voice, I can't imagine a version of the song that misses the point more. The intro alone warrants a poke up the nose with a burnt stick. 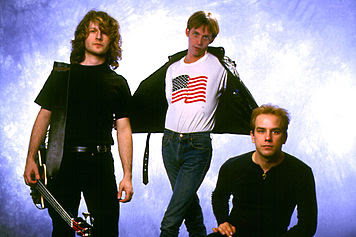 From the mostly exellent Sing Hollies in Reverse tribute album, and a surprising misfire. I love Material Issue, and on paper they were a great choice to cover the song, but the result is about as generic bar band as can be. 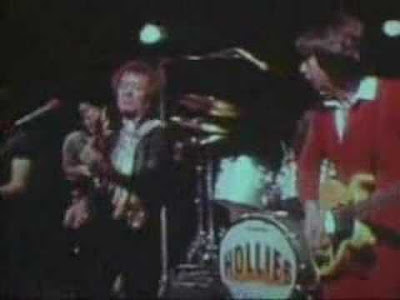 And speaking of the Hollies, let's just say that the Prince classic doesn't really play to their strengths, no matter how much Allan Clarke may have wanted to sing it.

More proof, as if it was needed, that power corrupts mediocre session singers as thoroughly as anybody else. I should also add that, assuming she's playing the piano here, she manages to get a chord wrong during the first verse. Which is usually considered really hard to do on a four chord song.

And the Numero Uno was-this-trip-really-necessary? cover of them all simply has to be....

"Think I better dance now." Uh, Tom -- please don't put yourself out on my account.

Alrighty, then -- what would YOUR choices be?
Posted by steve simels at 12:02 AM

Grateful Dead: Dancing in the Streets.

Again, I say this as a Dead fan.

Also, not a cover per se, but that Kid Rock mashup of "Werewolves of London" with "Sweet Home Alabama" is about the most fatuous thing ever.

Would it be cheating to say any cover performed by U2?

steves nails U2 on the covers - but most especially the awful moment at the beginning of their cover of Helter Skelter (on Rattle and Hum) where Bono says that they are stealing it back from Charles Manson.

I mean, I actually really like 'em, and I'm willing to cut Bono a bit of slack (life =is= difficult for an Important Rock Star), but still, did they really have to include that on a record? The comment could have been left out...

Two other specific ones to mention:

Sixpence None the Richer - cover of the La's "There She Goes". I suppose this was reasonably ok, and the lead singer had a sweet voice - but, you just can't improve upon the perfection of the original. So why try?

An unwitting self parody and painful illustration why the hippie movement peaked circa 1965. By 1967, those rolling stones gathered too much fake fringe and pocahontas headbands, man. :)

The Beatles - A Tascht of Honey

I am baffled that you don't like Material Issue's "Bus Stop", on "Hollies in Reverse" (also known as "the only tribute album that works"). Man, it's got energy, they hit the notes, and they seem (like all the groups on that album) to genuinely like the song.

So how about Nancy SInatra doing As Tears Go By in the style of "Girl from Ipanema"?

Is is blasphemous to say almost all of Lennon's "Rock & Roll" album? The sound is horrible and everything is twice as slow as it should be.

And I like that cover of Bus Stop, too.

I actually really, really like Kiss's version of "Then She Kissed Me." (really)

First of all, no acknowledgment that I guessed the Listomania topic correctly?

I don't think they ever recorded it but in the early 90s the Grateful Dead were performing a listless cover of I Fought the Law that just hurt. Reaaaally bad.

Telly Savales recorded some spoken-word covers of romantic ballads back in the early 70s that are just so sleazy and wrongheaded, they're practically thrilling. Sorry I don't have a link handy.

Annie Lennox' cover of "Whiter Shade of Pale" ... she's trying just a tad too hard to "interpret" it. Sometimes a song should just be sung.

Sorry, but you had the misfortune of being first, so I couldn't acknowledge it.

Linda Ronstadt's whole Elvis Costello period. They're all bad, why pick one?

Not really a cover of a pop or soul song, but Anita Bryant's cover of Phil Och's Power and Glory is singularly clueless.

And how many covers of Leonard Cohen's Hallelujha have there been in which the singer clearly has no idea what the song is about?

I see your Rolling Stones and raise you her version of Chuck Berry's Back In The USA;>

You had me till the Tom Jones, which I love. I hope his tongue was planted as firmly in his cheek as I like to think it was when he recorded that one.

And we must remember that Little Richard adn the others LOVED Pat Boone because he got them paid as songwriters. Elvis said as much regarding Linda. Once he was more or less sober.

And the heavy metal record is a hoot! Say what you will, but dude has a sense of humour.

And Willie Nelson did a cover of Don't Give Up that I go back and forth on. His An American Tune really works for me though.

I'm of the opinion that Tom was not, shall we say, completely in on the joke where "Kiss" is concerned.

Apropos of Trey's comment (and steve's response): I'm not sure we can ever know how "ironically" a singer means a cover version. (Dig those ironic quotes around the word ironically! Meta, man!) I mean, I'd like to be able to box off much of Pat Boone, and that odious Paul Anka record from a few years back (here's his bemusing version of "Smells Like Teen Spirit"), as well as the Shatner/Nimoy/any-60's-TV-star-you-can-think-of-who-made-a-record contingent, but I just don't feel comfortable doing that: whether because of money or market position or sheer bloviating chutzpah (is that redundant?), I think these singers thought they had something to bring to the table.

And I humbly offer my choice: Kylie Minogue's "Locomotion": From joy to joylessness. (Tiffany's "I Think We're Alone Now" is probably to blame, and a close contender.)

That Kylie Minogue record has been one of my pet peeves for ages. God, I hated that Stock-Waterman-Aitkins or whatever they were called production collective.

"The Sound of a Bright Young Britain" was their slogan. Translation: soulless corporate yuppie shit, like Margaret Thatcher's soul made flesh.

One of favorite bands growing up, but X's version of "Wild Thing" and the Knitters doing "Born to be Wild" always seemed pointless.

I don't care how big a hit it was, Grand Funk Railroad's version of Locomotion is nails-on-a-blackboard awful. The entire fucking vocal is out of tune and not in an ironically subversive way, just in a bad grates-on-your-nerves way.

And there could be a whole subcategory of this list called Bob Dylan Covers of Other Peoples Songs. The most obvious is Dylan's cover of The Boxer from Self-Portrait and at least half of the Christmas From the Heart album. Then there's this, which I kinda like, actually, from a studio session on May 1, 1970:

If nothing else, Dylan has always been fearless when it comes to singing other peoples' songs....

Hearing the Kiss version of 2000 Man got me to listening to Satanic Majesties again, so there's that.

U2 -- Night & Day Only have to think of Bono portentously intoning "the drip-drip-drip" and I laugh; but a coworker at the time thought it brilliant.

MC5 -- Tutti Frutti "Generic bar band" about says it, and a terrible way to start the record. Not overly fond of the closing cover of Back In The USA either.

If we're talking Grateful Dead, there's a goldmine to be had. Anybody ever hear Bob Weir racing through Marty Robbins' "El Paso" like he had a plane to catch? Hey, those words are there for a reason, dipshit.

And I know I've mentioned it before, but our granola-rock station around here was playing a Mike Stipe - Natalie Merchant live duet of "To Sir With Love" that just dripped with a combination of self-regard and utter lameness. Die, bitches!

Also, pardon the blogwhore, but the you're all invited to sample the Friday Awesome Guitar Solo series at my shitty blog. Today: extra awesomeness. Click me name, what.

Behind Blue Eyes by Limp Bizkit.

Peter from the LB said...

Elvis Presley covering his own songs anytime after 1968. Overblown Vegas treatments of classic pop hits. Even James Burton and the TCB band couldn't make those attempts listenable. Shlock rock all the way.

And lay off Linda; she nailed Blue Bayou!

I really like X's version of "Wild Thing" - ok, perhaps not quite as good as the Troggs original, but, different enough and certainly played with gusto.

But I gotta agree with SteveS on Tom Jones/"Kiss" - the version is different, yah, but not in any way that I find interesting or endearing. The wonder of the original (to me) was not just the funk & the lyrics, but the spareness of it - in this case, the bombast just doesn't work, even as a (potentially) interesting contrast.

The Kinks' version of the theme from Batman. It appeared on a live album I got as a cut-out at Sam Goody's. It still haunts me.

Gummo and NYMary aleady alluded to this, but William Shatner's Mr. Tambourine Man.

The Grass Roots' version of I Am A Rock is a pretty dismal moment.

Then there's Paul McCartney's appalling live versions of "Oh Yoko", "How do you Sleep?", and "Woman is the Nigger of the World" ... (Okay, April 1st is over.)

The version of Good Lovin' that the Dead did back when Pigpen was still singing it was a whole 'nother animal from the cutesy-poo sorta-Latin take on it that they brought back in the late 70s. It rocked and it was fun. Same with Dancin' in the Streets -- the vocals were always a mess but the version they did back around 1970 or so was a fun, funky, jammy thing totally removed from the disco disaster of 1977 on.

Speaking of The Hollies, their cover of Bruce's Fourth of July, Asbury Park could also have made this list.

Sheryl Crow's version of "Sweet Child o' Mine". Why?! Guess she felt the song deserved a wider audience.

And then there's the Oak Ridge Boys' reading of "Seven Nation Army". Not good...not funny...not ironic. I suppose they were trying to give themselves a modern reinvention, a la Rick Rubin with Johnny Cash. They needn't have bothered.

Another one that randomly comes to mind is Bob Seger's live cover of "Fortunate Son", which was a waste of B-side space, even for Bob Seger. Vacant and plastic.