The Goys of Summer (Part II) : Even a Stopped Clock... 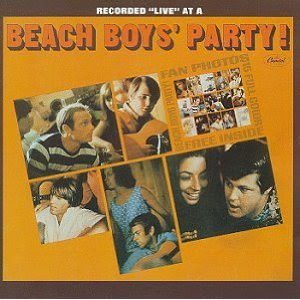 And speaking as we were yesterday of the most odious of The Beach Boys, and notwithstanding the ineluctable fact that Mike Love is a humongous dick, please enjoy a thoroughly charming outtake (in stereo!) from Beach Boys' Party!, the 1965 album where Brian Wilson essentially invented the Unplugged™ format two decades before MTV.

Lead vocal, declaimed with just the right air of on-the-nod nonchalance, by the aforementioned humongous dick. And a terrific job, I think, despite his humongous dickishness.

I refer, of course, to a very cool, albeit perhaps overly under-rehearsed, cover of Leiber and Stoller's immortal "Riot in Cell Block Number 9." 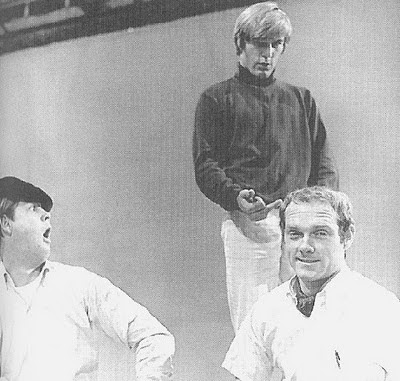 Hey, I can't help it, that one just cracks me up despite the presence of you-know-who. And don't worry -- I have no intention of trying to make some larger point about it.
Posted by steve simels at 12:22 AM

Plus, he has such goyish good looks in that shot
:)

He's obviously baked, don't you think? The poor Beach Boys never got the hepster cred for smoking pot earlier than most of their fans....

I think it was the matching striped shirts.

He has a great voice, but not great enough to lift him out of that karma hole he's stuck in. He'd have to sing like Aretha before I'd call it even ... Aretha at age 19, at a Pentecostal Revival...

If you hadn't identified the band, and there hadn't been the tell-tale background chatter, I wonder how many people would have guessed it was them? I'd bet more than a few would have put this in San Francisco, circa 1967 ...

Regarding this song, it's interesting to compare it to "Student Demonstration Time" on Surf's Up...full production, sirens, etc.

I don't know what the DivShare problem your having is.

Love's a great singer, at least he was on the prime BB sides.

This in no way reduces his humongous dickishness.

I was looking for a picture of him onstage in spandex in the 70s but I came up dry. I know it's out there.

However, while searching, I somehow came across a page that described an ELP concert in the 70s that had to be stopped midway, because their onstage "tarkus" blew too much foam out of it's nose. Apparently, the headline read: PROP SNOT STOPS PROG SLOG.

He's not a "great" vocalist. He was just there, and we can't imagine the BBs without him. I know I idolized him as a youth, along with Dennis and Brian ... all knowledge of his sinister nature came later.

Steve, thanks - got it working.

By the way, I can never get enough Beach Boys' gems - keep 'em coming!

In response to the 'Girl Don't Tell Me' post, Carl had an amazing voice for his age.

My first rock show was the Beach Boys at the Asbury Park Convention Center in June 0f '65 (the week before "California Girls" came out -- they premiered it at the show).

I got to Asbury early in the day, and I went down the boardwalk to check out the venue. And there were Carl and Dennis on the roof, moving the letters on the marquee around so they were misspelled. TONIHGT -- HET BEACH SOYB.

Carl was exactly my age, and my total hero as an aspiring guitar player. You can imagine how totally knocked out I was watching this...

Some friends & I were swapping stories of people we've gotten to meet over the years & my bud Marty mentioned that he did get to speak with Mike Love in passing once & was truly surprised at his astounding rudeness. So yeah, a total buttsnacker is Mr. Mike.